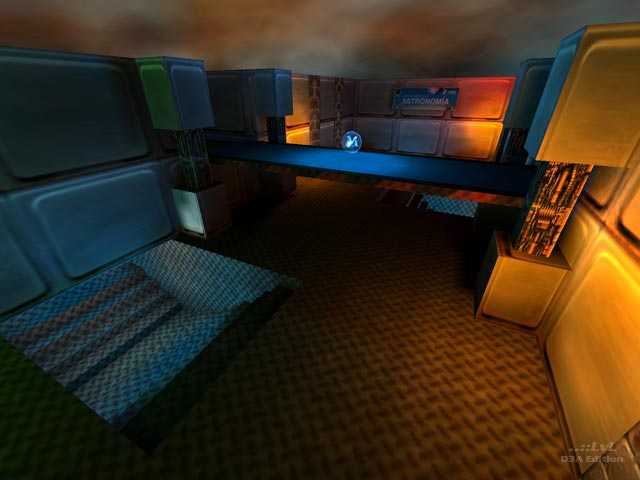 Gauntlet is a small, seriously flawed deathmatch map that contains the typical characteristics of a person's first creation, and then some.

The map's theme is highly eccentric. It feels like a childrens playground with its bright colors, some of the textures, and some crayon marks on the walls in one room. But the shining metal, computers, etc. suggest some research facility as well. Maybe it is a laboratory for 5-year olds? Someone help me please! At least it is consistent.

The layout is symmetrical and could have been massively improved with more connectivity, (some rooms having only one way in and out) a higher ceiling (I bumped into the sky?) and more vertical action. One room contains a bridge with a MH and serves as a hub to the rest of the rooms. Two of them contain an almost identical arrangement of crates with differing colors, almost resembling children's play blocks more than shipping containers, with a strip of slime which can not be fallen into and is used only for "aesthetic" purposes. Both rooms contain either a RG or LG depending on which one you are in.

The other two rooms branching out from the center are slightly larger but even more terrifying. At the very end of either room is a control panel with random images of video games, software, posters, etc. which have been placed there with no real sense of theme or atmosphere. (i.e. making it look like a lab computer, etc. instead of a mix-mash picture gallery) Next to that is a pair of layered doors which must be opened separately with your weapons (you cannot just walk up to them) or by shooting the button next to them. As the first door slides you will behold a screenshot of an MS-DOS window with various computer settings - what the heck?

If that was not scary enough, it all reveals a room using a high-contrast CPU texture (which is meant to be a shader blend, and not used by itself) everywhere and shelves containing a collection of weapons (including the machinegun!), health, armor, etc. with a RL inside a box that must also be shot to open it. In an actual game this means big trouble as one player can grab a hefty arsenal with little time and effort. If you ever get thirsty, there is also a few cans of exotic Mexican sodas, the textures slapped on small rectangular prisms with the white blank background around them. There is also an accelerator pad pointing towards the ramp up to the MH in the central room - really?

Yeah... I think it's safe to say that you should stay away from this place. Hopefully, however, the author can examine his mistakes and improve upon them in future maps. Time will tell...

Tigs notes: The original release, which EmeraldTiger used to review, included a number major issues including, but not limited to the following; a copy of the authors q3config.cfg (never include this), a damaged bot file and extra files that are not required. These issues have been corrected and the level now supports bots as well. 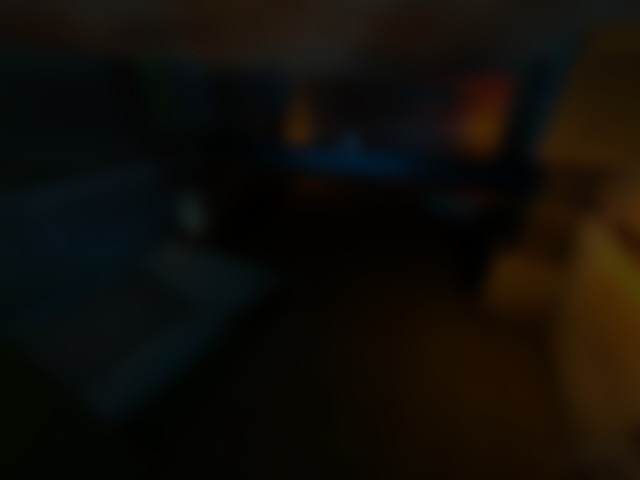