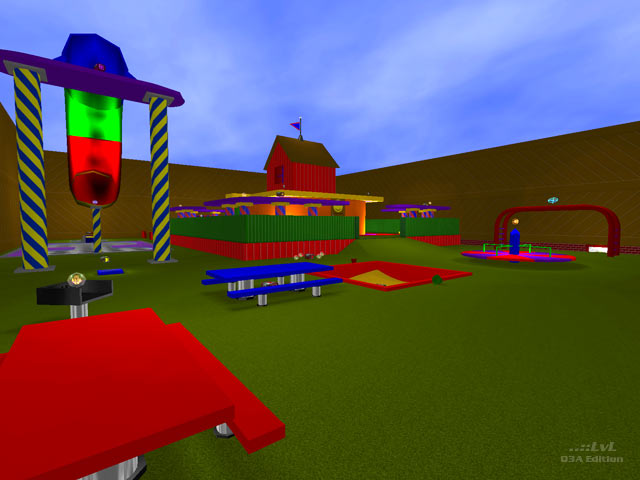 Box maps are typically frowned upon by the community. They typically take less effort to construct than "other" maps, and usually are not as fun to play due to the gameplay being less dynamic. This, however, is an exception. Playground is a large, open box map with a unique theme.

The concept behind the map is creative, or at least for it's time. The readme states it was created in 2000 and was never submitted to ..::LvL until now. It attempts to recreate a children's park, with a fairly minimalist texture set and bold, vibrant colors. Most of your basic playground equipment can be found here - a pair of pools, one being a kid-sized pool and the other larger; a swing set which is supposedly out of order; and kills on contact, which is funny but understandably unavoidable (due to the func_pendulum being hard-coded to frag players), monkey bars, slides, and more. It is fun to explore even if you're not doing any fragging.

How is the gameplay? Pretty good, actually. As far as item placement goes, three items can be found in the center of the arena at different levels - a SG, located in a small chamber accessible by a spiraling tube at the bottom of the map; a RA, located at ground level; and a RG at the very top. As you would expect, the RG is the weapon of choice due to it's high positioning and the widespread nature of the arena. It is especially easy to pick off people using the two YA jump pads. The quad is located on top of the monkey bars, only accessible by rocket jumping; and last but not least the MH is in a colorful slide which dumps you into the large pool, so be sure that there's no one nearby that will frag you while you are swimming.

Bot play is not bad but is not great either, they ignore using some of the equipment like the mega slide or the 50+ health at the merry-go-round, and obviously can not rocket jump to the quad.

If you are into novelty maps that set themselves apart from other arenas, give this one a go. Others may find it too gaudy to get their head in the game. 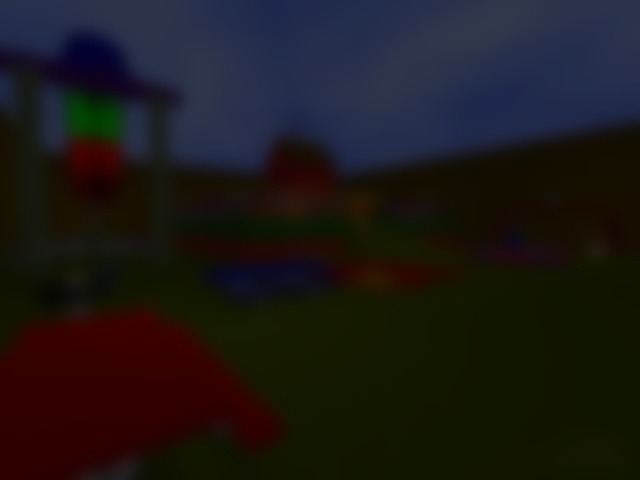