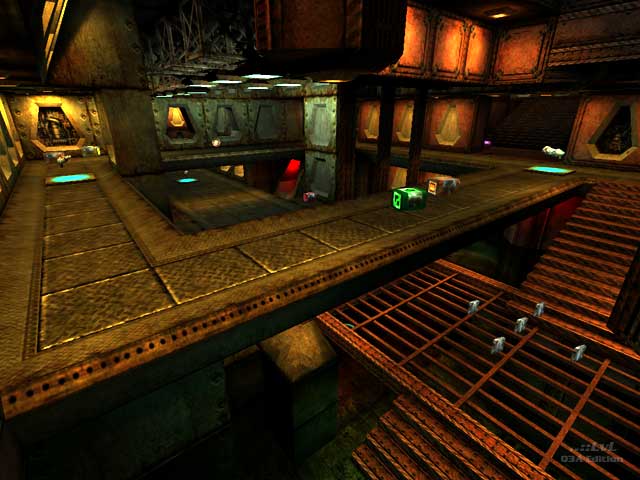 Slipgate is a kind of homage to Quake. It is what Quake might have looked like if the game had been created with the Q3 engine.

The layout of the map, which is, close to being small rather than medium in size, is fairly simple. There is a main area bordered by a walkway and above that to the side a couple of flights of stairs which lead to a short corridor from which you enter the slipgate room. From there, you teleport to the RG room and then return by another TP to the main area. I felt that there ought to be more map partly because this feels like a fragment of a larger map. The quad damage at one end tends to have a focal feel, but there is nowhere and nothing to counterbalance it. The bots show no real interest in the RG and the room where it is merely a transitional space because it is too cramped to be an area where you would want to get into a scrap. Apart from the limited scope of the map, the layout has three tiers: there is some over and under, but it is mostly up and down. There are some long-ish lines of sight with little cover between the PG/LG ammo at one end and the quad damage at the other; a similar situation is found where the RA is.

Item placement and load seem to be all right, with weapons and ammo being kept separate from each other to encourage roaming. On the other hand, it might have been better to leave the quad damage comparatively isolated to try and discourage the bots from heading to that end of the map.

Lighting in the map is good. It's bright enough to see things clearly, but dull enough to complement the ambiance of the level in this style.

As you might expect from my observations about the layout, gameplay is not all that you might wish it to be. Firstly, there is no fraglimit in the .arena file so that if you run the map from the command line, you have to change the fraglimit manually or run with the fraglimit of the previous game. As I noted above, the bots tend to gravitate towards the quad damage, the situation being exacerbated a little by having the PG at that end and Klesk, a known plasma whore, as one of the bots. I note that Wrack is of a similar disposition. The author notes that bots have issues exiting the water feature and the same can be true for human players who bob in the water, but don't exit it with quite the celerity with which it usually ejects them. But gameplay is fairly fast-paced because of the size of the map so that there's comparatively little delay between respawning and rejoining the battle.

Where Slipgate really shines is in the architecture and texturing. As stated above, it's what Quake might have looked like if the game had been created with the Q3 engine. The author has captured the style and made it more sophisticated, as we would expect of a contemporary map. It is a slightly grubby map: you can smell the rusting metal; you can feel the chilliness in the air; you can hear it creaking; you can hear footsteps echoing in the distance and wonder whether you'll find the person making them before they find you.

The author has included a custom soundtrack, which runs unobtrusively in the background.

Although I might not recommend Slipgate for the gameplay, I would recommend it for the artistry. It shows that even after eight years, there are still gems like this being created for Q3. 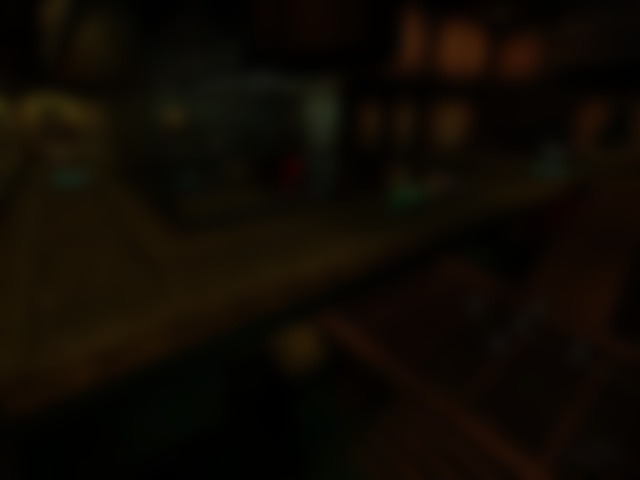