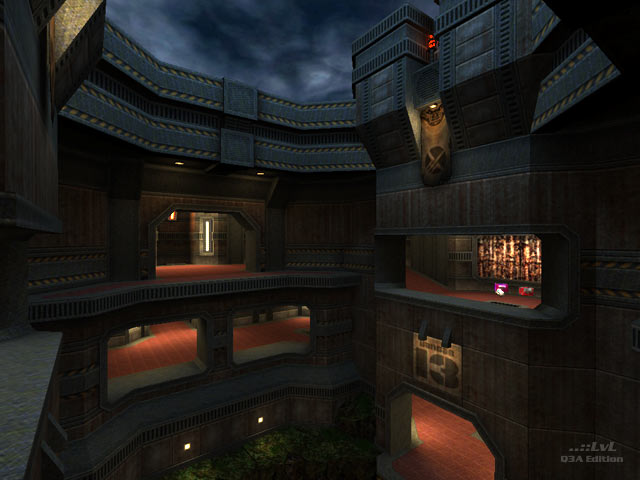 Hangar Base is a vertical map on three interconnected floors surrounding a pit. Windows on the middle and upper levels allow for some sneaky frags when the opportunity arises.

The texturing and architecture are praiseworthy, the author having done an excellent job on both in a cleanly constructed map. The lighting is perhaps a little flat, although I do not regard that as a significant issue in this case. There are no glaring issues with the item load or its placement, which seems to be better suited to a greater number of players than a smaller one.

My initial impression of gameplay was less favourable, and I do still have doubts because of the layout of the map. The first time I played Hangar Base, the arena file loaded up two bots, which resulted in a rather uninteresting game. The second time I played the map, I eventually increased the number of bots to six and found that gameplay was better for it. This might be a medium-sized map, but there is a lot of territory to be covered. Nonetheless, my doubts about the longevity of a map with such a circular layout still remain.

To download or not to download? That is the question. I think Hangar Base is good for a game or two after which you will play it occasionally; and only then because you can not remember its appearance.

Hangar Base by sst13 is a very clean looking medium-sized base map with circular gameplay. There are three distinct tiers, each with multiple open sides looking down into the pit in the center of the map. These window-like sides really make the gameplay flow. The windows are too far away for the player to jump straight across, but players can jump back and forth easily through adjacent windows. This mechanic, coupled with the rocky rim around the pit that improves the first tier's connectivity really forms a strong bond between all areas of the map. Balanced distribution of bounce pads and ramps make the each level easily accessible to the next. Travelling through this map is so intuitive that you may sometimes forget where one tier starts and the other ends. Rarely is a map with multiple levels of gameplay pulled off this well.

All weapons except the railgun are used, and the machinegun starts with 50 bullets. Item placement is impeccable and even with many players you will always feel like you have just enough of everything. The author recommends 2 - 6 players, and supplies are sufficient even for two more. I found 1v1 matches to be generally less enjoyable than the larger ones due to the amount of item grabbing, but they play fine otherwise. In larger games, after a while, bots will tend to accumulate in one section of the map, resulting in some really crazy and climactic firefights. After everyone is dead and gibs are everywhere, players respawn throughout the arena and control restores itself. Gameplay this solid can only be the product of ruthless beta testing. I tip my hat to the author for all the tweaking that must have went into production of this map.

As I stated before, this is a very clean cut looking map. Thick trims and geometry complement the texture set (Ikka "Fingers" Keränen's ikbaseq3) very well, and overall, this map is quite easy on the eyes. Hanging wires that actually sway from the ceiling, and vents that blow air into the room provide some insight to the concept of the map, but it is clear that atmosphere was not the highest priority of the author. This map's visuals could have gotten very monotonous after a while, but well placed organic textures throughout the setting provide the kind of aesthetic diversity that keeps things from growing old. Every once in a while, you'll look up to see a deep blue sky through the open ceiling and embrace the pleasant change of scenery.

I really can not say anything bad about this release. Few levels have captured my excitement the way this one did and I do not see myself ever removing it from my hard drive.

An instant classic that I recommend to all. 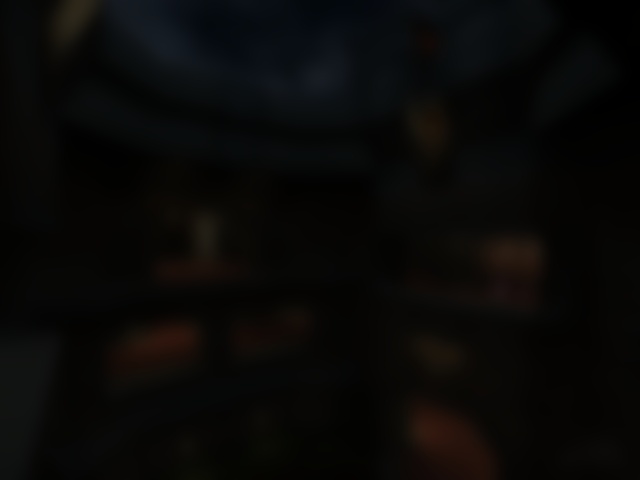