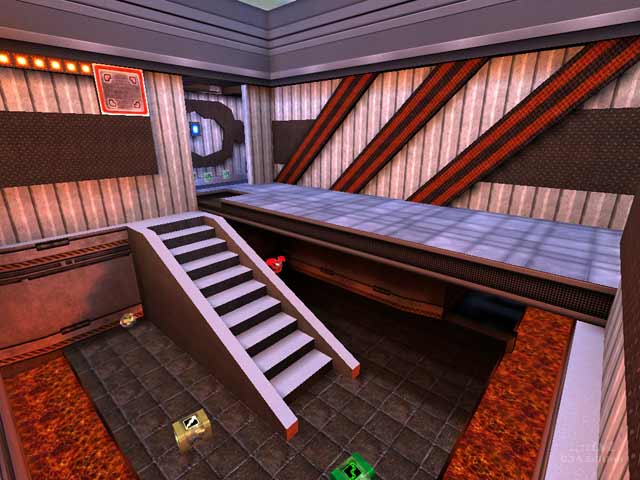 In his readme, the author says that this was a level made a long time ago from a now lost map file. As I traversed it for the first time, I felt that the loss of the map file was less than a greater tragedy - the survival of the playable map itself.

I had a look inside the pk3 only to find a collection of original shader files that didn't need to be there, quite a number of original textures which should not have been there, and a thumbs.db file. I removed these largely superfluous assets and found that one JP texture appears to have come from the mapmedia.pk3. It also turned out that the .arena file needed fixing in that the list of bots should have been enclosed in quotes so that they'd all spawn in the map.

As the author says, the layout is roughly a figure eight. There is some verticality, but gameplay is mostly ends up being throughout. The central room is open, but other parts of the map are a little cramped, and in a few places, most of them less often frequented, the geometry is awkward in some way with angled brush faces; the absence of clip brushes; and one peculiar door which is asking players to trip over it at an inconvenient moment. The connectivity is lacking in the sort of sophistication necessary to raise the quality of the gameplay.

The most notable flaws among the items are the presence of two suits of red armour and three of yellow. If that was not enough, one RA, to be found in the area bordered by a channel filled with lava, is a little too close to the YA near the GL. As for the rest, the grappling hook is included, but if such a thing is necessary to accomplish some task in the map, I could not detect it. The MH is tucked away in a small alcove, although getting it poses no real difficulties unless you are under fire. The RG is in a trench which is more an irritation than an obstacle to its acquisition. As for minor items, the author has at least been less cavalier than I've seen in other maps like this.

Lighting in the map is generally bright and flat. It's only when you get into the tangle around the LG and drop down into the RA/medkit passage that you see some variety in it.

Gameplay has nothing to recommend it as a consequence of the map's rather limited layout. As is the way of Q3, you shoot at opponents and they shoot back, but the pleasures of tactical play are largely absent beyond, say, firing a rocket at some unsuspecting or unwary bot, and then taking cover. If you get any enjoyment from that approach, it is only from the hope that the bot is suitably annoyed to be caught out is such a fashion.

I've refrained from commenting about the visuals because Q3 is more principally about gameplay than about aesthetics. (I believe the Q3 map reviewers' code of conduct requires me to say or allude to this.) The aesthetics of the architecture and texturing have nothing to recommend them. Not every well regarded map is necessarily graced with some outstanding piece of architecture, but blumetal lacks any flourishes that might raise its appearance above uninspiring. The author seems to have consciously chosen to texture the level in the style of Old School Doom II custom maps before consistency became the guiding principle. In doing so, he has produced a map redolent of the grotesques found in the opening lines of Horace's Ars Poetica, which most of us would judge to be a first effort and recommend that it should have been left in the Learning Experience folder - preferably on the HD of an old, forgotten PC which is gathering dust in the attic beneath a heap of more recently acquired machines.

The map might have been spared one of my diatribes if the author had consulted learned persons on various forums, who would have disabused him of the notion that it was upload-worthy without extensive corrective work. He could decompile the map and undertake the necessary repairs, but if it is somewhat old, the work required probably makes starting on a new project the preferable option. Thus to conclude: blumetal is neither worthy of upload in its current state nor, as a consequence, worthy of download. 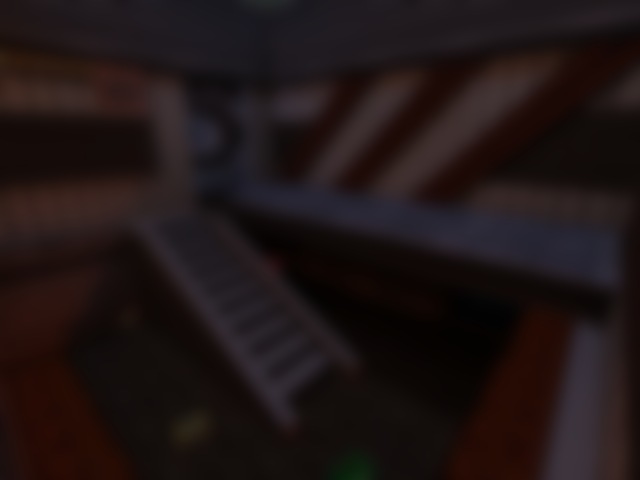