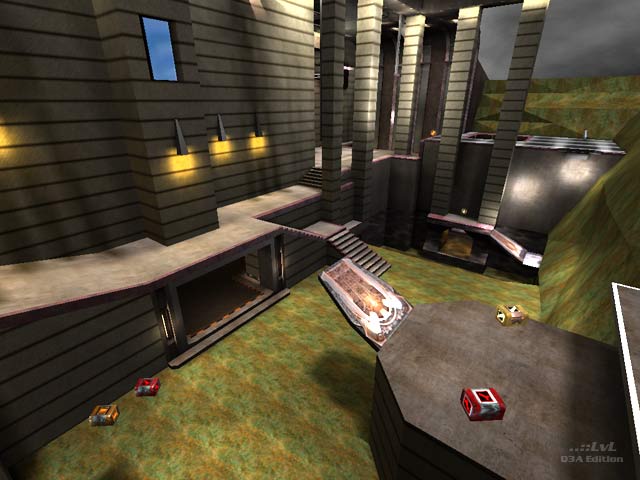 The readme calls this map Edge Arena and mentions inspiration from Quake 2's q2dm1 The Edge, but the map seems to call itself Cyber Hybrid Zone and bears a closer resemblance to one of the original Quake 1 DM levels, The Abandoned Base (dm3), though without the water in the outer courtyard connecting to the inner atrium's pool (and without using the lightning gun in the water being quite as ... interesting).

The readme mentions two custom textures -- those would be the ones missing from the pk3, resulting in a large expanse of holodeck flooring in a couple of places. The readme does not mention the high polygon counts, reaching 15,000 in places.

It is a large, sprawling tech/base complex with every weapon and average gameplay in FFA. It appears in the Skirmish menu for Tournament and Team Deathmatch also, but is rather large for the former (and the Haste and BFG spawn in Tournament, so Tournament devolves into a first-guy-to-reach-the-BFG-wins contest) and lacks location markers for the latter.

There are some interesting glass ceilings and walls and some varied tech-style architecture; the theme is carried off consistently. The "mini" jump pads by the red armor pillar are interesting.

Botplay is supported and the focus of gameplay with bots tends to shift among the area with the spiral stairs and plasmaguns, the outer courtyard, and the large central room. Weapons, armor, and health are reasonably abundant for large FFA/team games. Team deathmatch has you resorting to the gauntlet less often than is sometimes the case.

Besides the technical issues noted previously, there are some additional gameplay-affecting concerns. One is that there are three large pools of water in the level, and two of them will damage and eventually kill you if you go in them. Slime or lava would have been more appropriate than water made to behave like either. Meanwhile navigation can be a touch gimmicky at times, both at the layout scale and locally. Layout-wise it can be a bit of a maze even after several games; finding the best route to the RA, BFG, haste, etc. is not always easy. At the smaller scale, there is a couple of finicky/gimmicky jump pads to use, including one flat one that actually fires you at a 45 degree angle up to a ledge and should have been angled to make this clear, and another where you tend to bang your head on the underside of the ledge it is supposed to fling you to. A somewhat confusing set of teleporters does not make finding your way around much easier. At least all of the areas are distinctive, so once you have been to a place you know it when you see it again.

Upshot: 6/10. Location markers, including the missing textures, better hinting, and fixing a couple of the more finicky jump pads as described above would raise this to a 7 or 8 pointer. 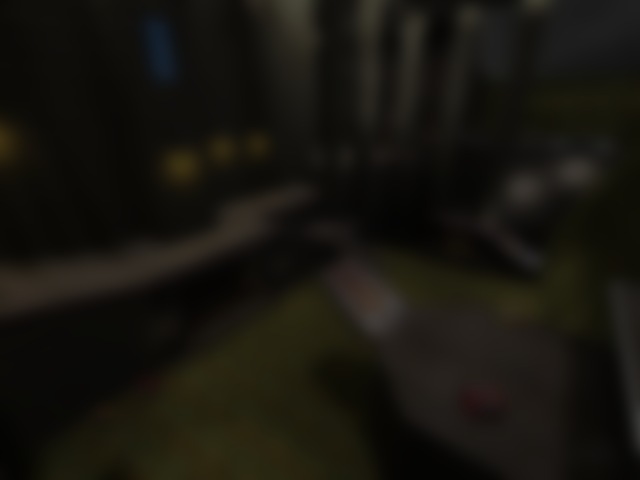