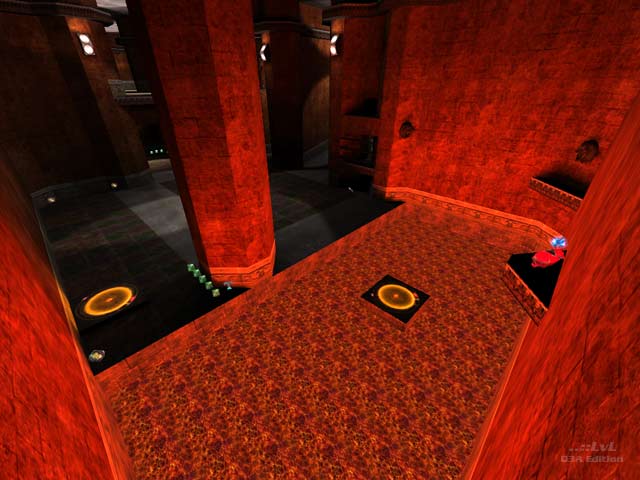 Geometry and layout: The map is basically composed of 3 areas. Center yard with some columns and a lot of SG, an ascending slope around it with PG and LG and an area next to it with some jump pads and a lava pool. One minor hallway leads to RG. There is also a Regeneration on one of the columns, and a RL suspended in mid air between them.

Map is rather small (although the author claims it can support up to 16 players) and the number of spawn points is limited. Jumpads are badly placed, and serve no major purpose, except to slam you into a wall on the other side of map. Bots tend to die like that occasionally.

Due to general openness of the map, strafing around is easy to do, and you can move pretty fast.

Gameplay: Low number of spawn points, possibility of fast moves, and little to hide behind turns the game into spawn camp pretty fast, even with only 4 players on map. It quickly turns quite boring.

Looks: Not much to say here, lighting is very basic, and maybe 4 or 5 textures are used on entire map, which taking its huge walls into account, means it looks quite bad.

Overall: Probably one of the authors first tries at map making, not something that should have been uploaded here. Best if you do not make bunny cry by downloading it.