The theme is sort of an art gallery, as the map consists of wooden rooms with paintings hanging up. The textures are pretty good; especially some of the wood ones and the waterfall. They have been used well to create the level's theme. The brush and patch work is nicely done, it also contributes to the theme of the map. The wall lamp models go well with the geometry. Lighting is good throughout the map, not too bright and point light values have been used. Now for the part I didn't like much - game play.

The map consists of two areas. The bottom area contains the rail gun (very strange to locate a rail gun on the bottom floor of a map, especially since there isn't a vast area to shoot in with it), a teleport (using the brilliant waterfall texture) and some stairs out. The teleport leads just up the stairs anyway, which I didn't think was too good in terms of game play. The top area consists of a largish room, with two hangovers and two ledges that can be reached from the top hang over. There is a single corridor that goes up giving access to the hangovers, meaning that there isn't really any where much to go to get away from your enemy (if you go back into the main room they can easily find you again if you come up the corridors or go downstairs to the teleport (remember that it leads back up the stairs again)). The item placement was very good, though; there were still four weapons and several health and armour items without it being too crowded in the very small map (though I still think locating the rail gun on the bottom floor wasn't very good, although the only other place it could have gone was where the grenade launcher was, and the grenade launcher really belonged where it already was). The lightning gun probably would have done well in place of the rail gun; it is very good for covering thin corridors with its concentrated firepower.

Good for a couple of games, but not really a keeper in my opinion. I suggest checking it out anyway, if you are a tournament fan. 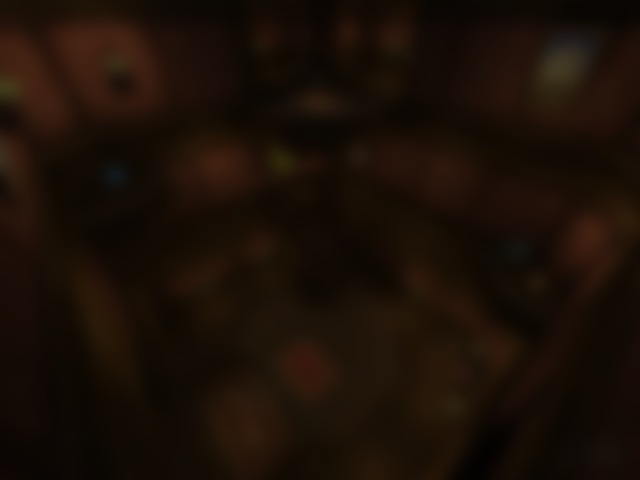