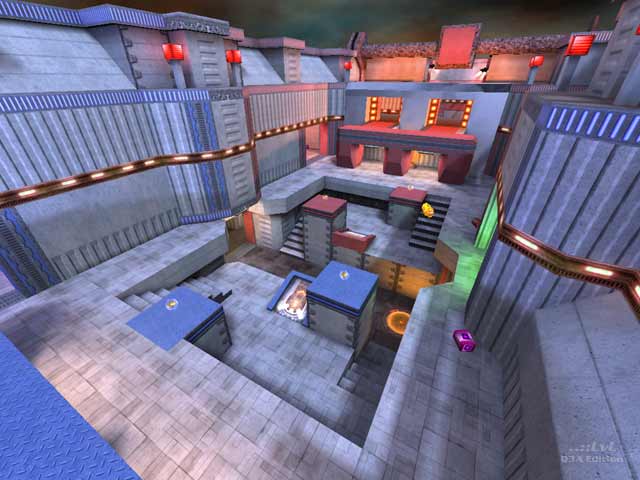 A mid sized CTF map. There are a number of paths from base to base. While this is a good thing it can be a little confusing at first. If you lose your path it can take a bit to find it again. The player respawns are not focused around the flag base. If you are new to the level it can be bit hard to find your base. Once you have the layout sorted things start to pick up on the game play side.

There is plenty of team colouring (too much in fact) but oddly it does not help you find your way back to base. The lighting is a little bland and a shortage of trims and details gives the map a kind of blocky look. The sub-basement fog is a little too thick. Weapon placement is effective and botplay is pretty good.

Out of My Head is a medium to largish CTF map by <|3FG20K>. The map consists of a stack of largely open and symmetrical rooms along the North-South axis with the flag bases set back centrally along the East-West axis of the level.

Because the level is bisected about the North-South axis, aside from the flag bases themselves, both the red and blue zones touch in the centre of each room along this axis. This may cause confusion for players initially as to how to reach the flag bases because every area is in both zones. Players traverse this axis without technically getting any closer to the flags. This North-South bisection has also caused considerable problems for the author in terms of weapon placement. Because the majority of the map lays in both the red and blue zones, meaning the majority of the map layout constitutes the "middle ground", the author has been unable to place anymore than one weapon in each area without creating clutter.

So you will find along this axis a single RL, PG, and most strangely of all a third shot gun. (To see more acutely the problem of bisecting a CTF map along the North-South axis, one could take a look at CZghost's remake of DM17, The Longest Capture. Mirroring the level is still, in my opinion, the best way to construct a CTF map). Two RGs are quickly accessible from the central room moving into each of the flag bases, making their presence somewhat excessive and their ammo boxes somewhat superfluous. This is also the quickest route between the flags.

The routes and perches leading to and from the RG ammo boxes lends some depth to the map in terms of routing, camping, and z-axis fighting to make up for their superfluousness. It is a rather nice touch making full use of the level.

The author recommends 8-16 players but because of the lack of weapons I would suggest between 3-4 players a side and maybe 5 if item placement had been improved. An appropriate mod might mitigate the item imbalances. As far as CTFs are concerned I would have done the following: swapped the single RL and PG in the middle for 1 of each at each base, and either push the RGs further back into the bases, or move a single RG and LG along the middle, in order to fill in the gaps. In fact, the LG could have gone where the third SG presently sits, and the third SG could have been moved bottom centre where the PG currently sits but I think this would mean having to juggle the health spread around too.

There is also room in each base, along the lower fog-filled passages, for a GL as well. The destinations for the accelerator pads lead straight down onto bounce pads, which I also thought was a bit puzzling, and a well-timed strafe into the teleport should have taken players directly onto the aerially-suspended YA found in the central room.

Aside from all this, there is enough complexity to make games interesting and exciting and there is also a hidden passage, leading to both bases, and the quad too! Out of My Head is quite fun and worth a go, and has some replay value as well, but would have faired much better if the author had given more thought to the aerial layout of its design.

Tigs Notes: The original level reviewed by Seremtan (some how) was not the final release of the map. Because of this, the review was edited and may no longer reflect the opinions of Seremtan. 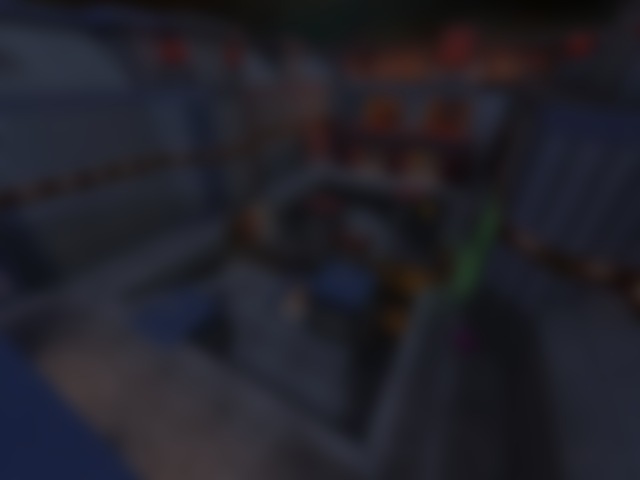