Description : Ever wonder about that strange weapon
Called the BFG? Ever think about it as this gun
that could have been cool but never made the cut
due to its cheese. Well I think this map shows that
the BFG takes skill and it can in fact be toned
down so its not Just spam!
This map was Inspired by Unreal, quake 1 dm6, and
the quake 3 BFG.
Its layout is allot like quake 1 DM 6 except BFGs
replace the rocket launchers.
The BFGs now only give 5 shots when you grab one
and the ammo boxes are worth 5 as well.
This is a BFG fest that takes skill not spam!

Note: This map is open sorce to any one out there
who follows the set guidlines listed in this text
file.

If your playing the map that this TXT file is for
then you may know that This map is a little
different than most maps released because even
after this map is fully released as a nonbeta it
will still be a ongoing project. I am planing on
doing a DM map pack that follows this idea. These
maps that I make will be patched and released as
new versions just like they were a mod. The
Version of the map will be listed in the name.
(IE lvldm1b5 means this is the 5th beta version.)
I will try to limit the number of versions that
get released to very few to make sure that
people dont have to many conflicting versions.
It should be easy to tell if you dont have
the same version just by the name of the map
though. You will only need to redownload the map
shader and screen shot files for the map
itself. The textures sounds and music will be
a different pak file that wont be needed to be
redownloaded every time you want a new version.
that makes new versions a much
quicker download =)

When these maps reach a point of perfection
that I feel is good enough they will be open
sorced for anyone in the public to edit.
I will release info with the map file so people
can see exactly what it was that I did to make
my map. Any mod authers out there that Dont
have a mapper but want to creat a small
map pack for a small mod will have full
access to a small list of good levels that
they can choose from to work with. I plan to
support mod authers with info to help them
work with these maps to make them work with
there mods. I may even pitch in to make a
special version just for your mod. I think
that this would be a great Idea for people
to start doing to make mods allot easyer
to create for quake 3. Open sorced maps
can make the scene allot more fun because
good mods can have great maps and that can
mean more great mods for quake 3.
The only bad side of this is all the junky
versions of the maps that might get released
by newbie level designers.

If/When this map goes open sorce I want
you to do three things when you release
the modified version of the map.

1. Make sure this text is released with the
map that gives full cradit to all people who
helped ect

2. Never release the new map with the same name
and version number. This can cause bad conflicts.

3. Try not to change the Music sound and texture
pack that comes with the maps. Instead release
the new music textures and sound in a new seperate
PK3 file so that people who already have all the
old Music textures and sound dont need to
redownload the same stuff.
(This can allso make your mod MUCH smaller too)

Additional Credits to : Carnage for His web space
and Input.
---snip--snip---
Louie "KnightBK" Doulias
Black Knight Productions
www.og-world.com
---snip--snip---
Thanks for your Cool Lens flare Shader File I used
in the map!

www.gamedesign.net for Linking me to some Cool
web pages to get some Cool textures.

I cant remember what place it was that I got the
High res Rock textures. I want to give you credit
but I cant until I find out who made them!
If you see your stuff in this map mail me and I
will add you into the credits before the map
goes Version 1

You may use these textures for any
purpose, provided this text file is
distributed with any/all textures you
use or distribute.

These textures are exclusive to
VRmagazine (www.vrmagazine.com) and as
such may not be presented on a website
for download.

In plain language, don't take
advantage of the hard work that went
into creating these. Inclusion of this
text file credits the author. You are
otherwise free to use and enjoy them
at will. Any questions or inquiries
should be directed to:
**email removed**
------Snip---Snip-----

thanks allot all of you. =)
I think thats every one. If you did help me on
this map and your not listed or you would rather
not be known then tell me.
As you can see I did my best to
list every one and everything that helped me
with this map so far.

Known bugs:
: None that I know of

Fixed and added in this versio :
: Added lots of bot roam Items
: BFGs now take longer to respawn
: Added a Rocket launcher
: quad is now the only power up and it
spawns in 2 spots randomly
: Updated basic Lay out

Known bugs:
: Needs a little more ambiant sound
: One dm start seems to get bots stuck in
the wall?! 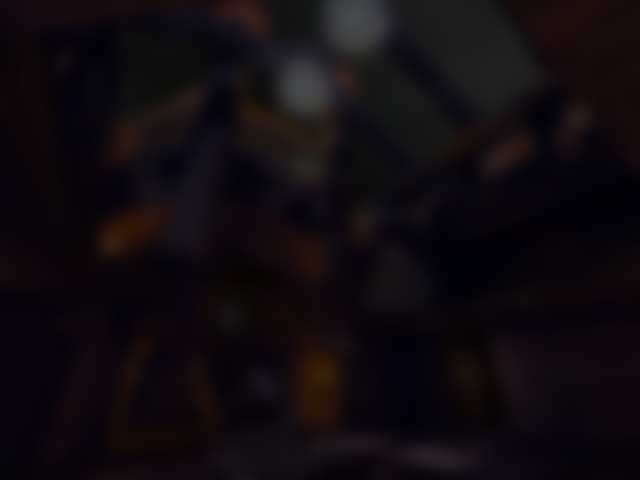