Gameplay Specifics:
-------------------
This is a wild deathmatch level based on my house. It features a toilet you can crawl into.
The whole level is well lit. Everything you need to see is lit. But at the same time it
has some dramatic lighting. It's action packed with many weapons and routes and killholes.
Oh yeah there is also a cool pool table with balls! New in the quake3 version is my room,
a new hall, another bathroom, and another attic. All game play modes are available in this
level.

"Lupo house 3" (lupohse3) is built for 2-8 players. There is just about everything
in this level except for the battle suit and personal teleporter. This level was originally
designed to be an exact conversion of my quake2 version. That didn't work out too well
because of the bot logic and/or new physics. So it became the true culmination of the
best features of all versions of lupohous. The homer bathroom sounds are back from the
doom2 version. A bookcase with a secret is back in from the doom2 version. The bathroom
teleport is back in from the quake1 version (it's funny and it makes the toilet very user
friendly).

There are plenty of new things to check out in this level too. There is now a
bathtub with plumbing that connects to the water tunnel. A new room, hall and attic lead
off from the pool room. The new room is based on my room. It has a computer (that views the
attic room above it), and a bed. Both the computer and bed are copied straight from the
myroom quake1 level I made which is based on my room.

There are many problems to work around when designing anything weird in a level that
you plan to play with bots. They have all kinds of issues with doors, jump pads, water,
bot roams, and slopes if they aren't done just the right way. It's quite annoying but I
still appreciate the fact that ID coded any bots into the game. They could have just
released a multiplayer only game. It's nice to have plenty of beta testers always
available at your finger tips even if you have to change the level to suit thier
deficiencies. I'm sure that someone out there will tweak these bots into perfection.

Go ahead and play this sucker online, distribute it, etc.
But, if your thinking about putting this on a shovelware CD, stop thinking.

Questions? Comments? Problems? Requests? Feel free to mail me at the emails below. 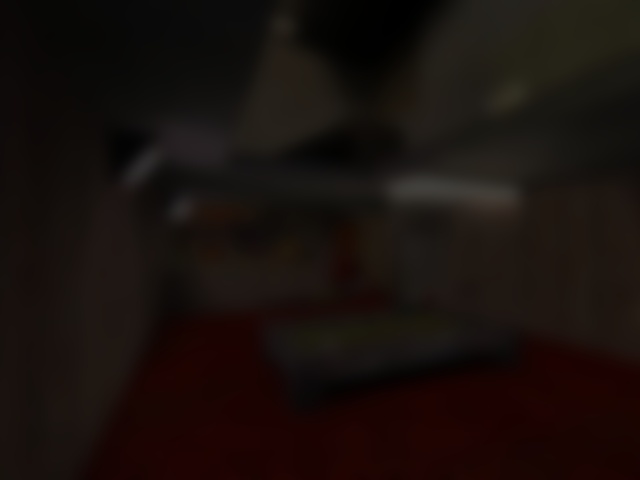