This is a new version of the map with bot support. Using a new feature
of q3map2 (v2.16) I created a special map for the bots, compiled it and then
re-linked it back to the original map file using the following process:

The above batch file was used to create a special AAS file from the bot only map.
Once finished the AAS file was renamed to match the name of the original map
file and compiled again with the second batch file below:

The final AAS file had the following bot clusters:

The compile produced a couple of bad clusters (6,9,10,12) but mostly
the map was split up nicely into a small collection of areas. The two
large clusters (1,7) are the 2 main arena's of the map.

I tested the map with various bots to see which one's produce the most
interesting combinations and got the following list:

The Pyramid of the Magician started life as a test map experimenting
with different terrain floor blend styles. I showed the test map to a
friend and he suggested turning the test into a map with game play!
and so the journey began ...

The original test map was made up of the canyon area and a few holes
in the steep walls for cave entrances. Once it was decided game play
was needed, the rest of the map was constructed from caulk walls to test
layout and flow. The footprint of the map is two arenas connecting
together via cave like corridors. At opposite corners of the map are
small hub/rooms which are used mainly for route switching and item focus.

In order for the map to be a memorable experience a theme or focal point
was required. Its always a good idea to have a visual hook or central object
in a map so that even if people forget the name of the map, they will always
remember the one special scene or feature.

Over the years I have collected various types of architectural books on
different building styles throughout history and one period which I always
wanted to do a texture set for was Mayan. The obvious visual hook had to be
a Mayan temple as it had not been done before and would be something
cool to build.

Finding the right kind of photo to use was not going to be easy as a lot
of the mayan temples are totally overgrown or ruined. One particular
temple which I really liked the look of was the Pyramid of the Magician.
With its steep step design and transversal corbel-vaulted archways, it
had all the characteristics of mayan architecture written all over it.

Next I needed to find a second temple because I did not want to create
an exact copy of something. So I blended the above temple with another
famous temple called The Pyramid of Edzna. This five-storey structure
combines the principles of the pyramid and a multi-level palace.

* If you want more information or to look at the reference images,
please check my website link above.

The textures had to be photo sourced as the map architecture was going
to be natural organic structures. I spent a good couple of weeks driving
around to various locations taking pictures and I certainly got my fair
share of dodgy looks! Taking close up pictures of plants and mud tracks
does look extremely odd to the general public.

On several occasions I had to go back to some locations because of lighting
conditions and the fact I was wearing a dark coloured T-shirt! A lot of the
leafs were taken extremely close up and often the colour of my T-shirt would
wash out or tint the digital image.

All of the leafs and plant objects for the map required alpha layers and
would need to be cut out so they look right. A classic method for this is
to use a blue cloth screen behind objects so that the screen can be selected
quickly and easily in a paint package and deleted. Something I forget about
out from my biology class is that most organic objects are slightly
translucent and will be affected by the colour of the screen behind them.

The best advice I can give after all my ventures into digital photography
is, wear a grey t-shirt and use a white cloth screen. Otherwise you will
end with a lot of tinted images and blue coloured leaves.

The most interesting part of the map for me was the caves and floor blending.
Trying to create organic structures is time consuming but ultimately more
rewarding than duplicating man made designs. I spent several days creating
different designs but the best results always came from contour lines
arranged to match the height of the landscape.

For game play and visual reasons the terrain landscape had to be smooth,
because most games don't have suspension physics applied to the player.
In all the tests I did, bumpy landscapes just felt like the player was
stuck on a plank and rolling across a bumpy field at speed. For visual
reason the bumpy terrain landscape just looked too low resolution and
felt awkward.

When designing the caves I wanted to create something which was cramped,
dark and very spooky. But this is not a good recipe for game play and drop
down points had to be added to all the intersection points. I spent ages
thinking of ways to create convincing looking ledges and holes in the
ceiling space. None of the designs really felt right but luckily while
out walking one day I discovered a very cool design. There was this section
of the ground which had suffered from huge subsidence and looked perfect
for what I wanted.

Most collapsed sections are usually made up from separate chunks which
subside at different speeds and directions. By filling up the ceiling
holes with spiral brushwork designs and then sinking each section by a
different amount the final design looked more natural. It also offered
interesting game play as it caught players tearing along like a safely
net and stopped them falling down the hole so quickly.

A certain amount of SFX is always needed for any kind of Q3 map like for
example jump pads, weapon markers and player spawn locations. All of
these structures needed to be themed correctly and something mayan had
to be found. Probably the most popular god of the mayan culture was the
god of rain, Chac. This is mainly based on the excessive amount of
relief's built in his image.

The god of rain, Chac has a long nose in the form of an upturned trunk,
spiral eyes and the rest of his face is similar in human characteristics.
The spiral eyes seemed the perfect choice for the Q3 SFX as it fitted with
the correct shapes needed. With a little bit of Photoshop work the spirals
were created and merged with some cloud layers from the original Q3 artwork.

The teleporters are based upon a Norse/Viking design and inspired by my
constant watch of the Conan the Barbarian films. I wanted to create
something which felt mystical/magical and certainly not tech or man made.
With the help of the ASE model format the teleporters were given a nice
twist and look like they had sunken from age into the ground.

Once the map theme had been decided it was time to squash the silence and
finally add the flesh to the bones. In order for the environment to be
believable and atmospheric a certain level of ambience was needed. The
outdoor areas needed to be alive with a wide spectrum of animal sounds
and the caves needed to feel cold, dark and lonely.

Each environment in the map had a certain role to play and the right
combination of sounds was needed to bring each section of the map to life.
Each key area was given a primary background ambience sound with additional
random triggered sounds on top for added variety.

All physical map objects like torches and teleporters were setup with
subtle sound loops so that the background ambience gradually changed
when passing them by. Unfortunately some objects had to have their
ambient sound removed because Q3 can multiple volume levels based on
entity proximity and portal space.

The final icing on the cake was really long sounds of a distant
thunderstorm approaching. This initially starts with distant rumbling
and then develops into the odd crack of thunder in the distance. These samples
are played infrequently and add great depth to the overall sound landscape.

Something which needed to be consistent was the architectural style and
mayans did have a certain way of building things. They did not build huge
column or curved archway designs until very late on in their history.
Their bread and butter of design was the transversal corbel-vaulted archway.
This is usually very tall and narrow at the top and often used to remove
pressure from very high steep staircases. it was also used with some
success at creating large indoor areas.

Some people during testing felt the caves were confusing and landmarks
had to be placed so that people could gather their bearings quickly.
One idea which worked well with the cave design was the vaulted archways
as they nicely fitted into a cave passageway. It gave the impression of
a gateway leading to something and nicely marked most routes to the temple.

All of the organic plant life was manually placed because it needed to
naturally fit together and into lot of weird locations. Using a better
rotation tool certainly would have sped up the process but ultimately
it felt satisfying to know that I grew/placed every plant myself.

PLEASE NOTE: The texture used in this map are not to be used under
any circumstances in any commercial products. YOU are not allowed
to make any money directly/indirectly from their use.
This situation is not open to discussion and if I find them in
any commercial product I will insist they are removed.

I believe that if someone is paid to make artistic resources for
computer games, THEY should do their job professionally and
not steal resources from the community. 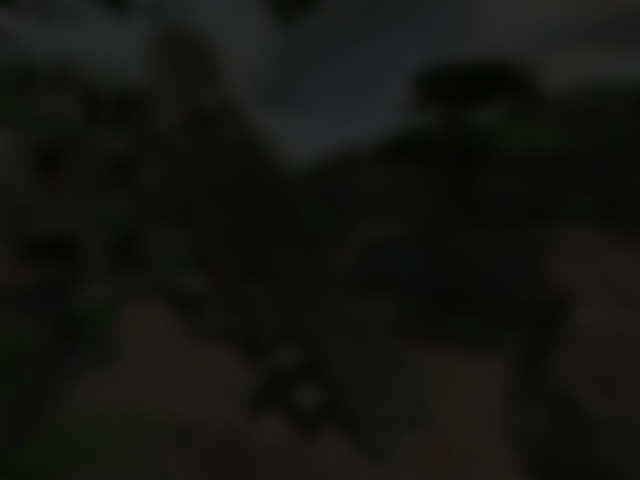