*Description:* Heart o' the City is a medium-to-large-sized vanilla
CTF map, which began life as a remake of Threewave map Desert
Cemetery, but somehow mutated into this gloomy, urban monster. The
layout is roughly similar, though there are several additional areas,
and this version is a whole lot bigger than Threewave's. There are 10
initial spawn points per team, but if you're planning to play this with
anything more than 5-6 per team I suggest having a fairly grunty machine
(but you were going to upgrade for Doom III anyway, right?). I've
play-tested on my 900MHz Celeron with a 64Mb GeForce2 and 256MB of RAM
(133MHz), and the FPS drops into the 10s and 20s in the courtyards
during rocket duels.

On loading it up, you may find some of the textures remind you of
something, and the hotel sign outside each base should ring a bell. Yes,
it's our old friend The Matrix once more (my previous released map,
Courtyard Reloaded
<www.planetquake.com/lvl/comments.asp>, had a vaguely
Matrix-y theme). My initial design (for which the textures were made)
was for a large sprawling hotel more closely based on the Heart o' the
City hotel in the movie, but I gave it up when I realised it was going
to be impossibly large (I envisaged 16 per team at least) and made this
map instead.

And so, finally, the dirt:

* *mapname:* stchctf10a
* *filesize:* 5.08MB
* *tools used:* GtkRadiant 2.1.12, q3map, bspc, Q3Map2 Toolz,
Q3Build, q3ase, Corel Paint 8
* *new textures:* these have been (mostly) grouped into folders
depending on where they are from. About 75% of the new textures
are mine (in the stchctf10_custom folder in the .pk3); others are
either by ydnar <www.shaderlab.com>, Cardigan
<www.planetquake.com/cardigan> or hfx
<www.planetquake.com/hfx>. There are one or two whose
origin I couldn't remember. The skybox is one of Cardigan's
excellent fully dynamic set, a download I strongly recommend.
* *new shaders:* yes, a few - with modified id and Cardigan scripts.
* *new models:* two of Todd Gantzler <i.am/professor3>'s
multiplant series in the courtyards.
* *new sounds:* a few by Death2UAll, from Claudec's Lair, the Q3A
sound resource site.
* *how to install:* if you need to ask, you probably shouldn't be
downloading this file. (Oh, all right: unzip the .pk3 into your
baseq3 folder. Happy now?)
* *future plans:* I promise my next map will not be another
Matrix-themed remake of a Threewave level. Unless it is, in
which case tear up this readme and forget I wrote this. But
seriously: I've been mulling over an idea than involves Lancaster
bombers, lots of fog and a farm in Normandy. Don't say you weren't
warned.

That's your lot. Have a Merry Fragmas and Happy New Gib. And don't
forget to upgrade! 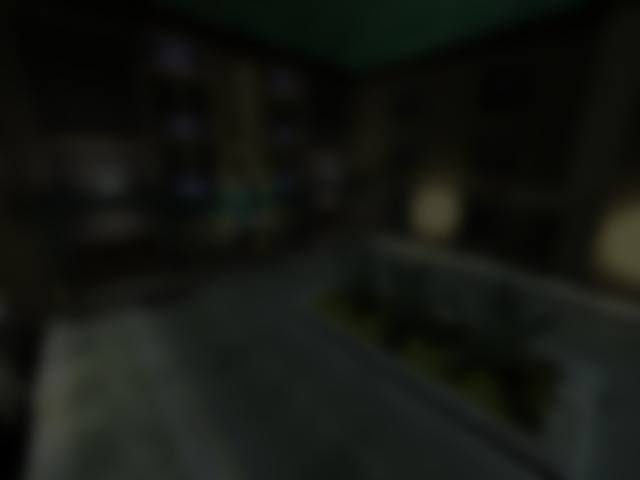