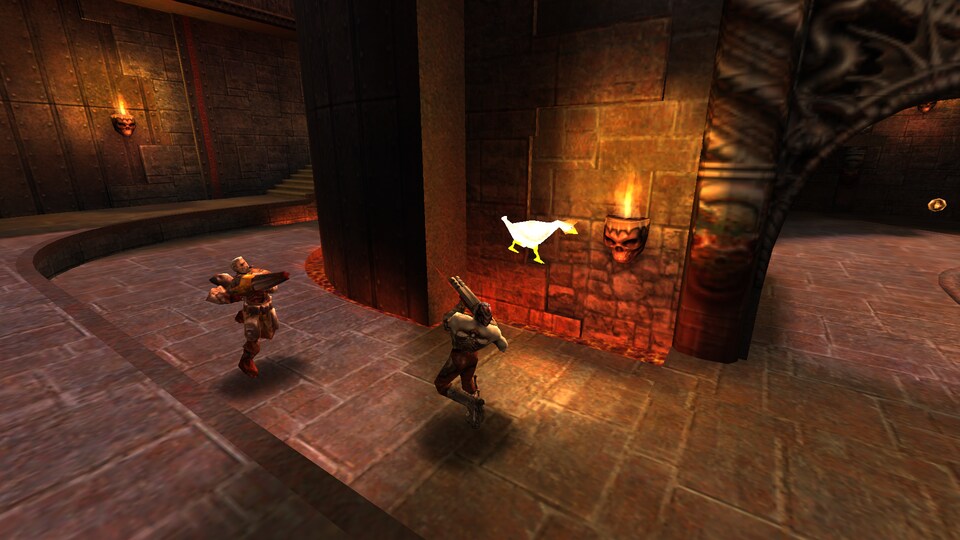 Jointly developed by Trash_man and DragonFyre, the "Chicken" in Catch the Chicken is no colloquialism or metaphor; there is, indeed, an actual chicken, feathers and eggs and all, that players must chase after. As you can imagine, this is a hilarious, and more importantly, wildly fun mod that comes in both standard Free-For-All and Team Deathmatch flavors. It's a mod that was popular enough to even get considered for the PlayStation 2 port of Quake 3, Quake III Revolution, and while it didn't make it in the final game, the spirit of the idea remains in that port's Possession game mode.

The goal of Catch the Chicken is to, of course, grab the eponymous fowl wandering around the map, who is by default completely oblivious to the highly dangerous live ammunition being thrown left-and-right by the bloodthirsty combatants of the arena. Or maybe it's not so much oblivious as it is just plain uncaring, which I guess makes sense when the chicken itself appears to be immune to weapon damage.

Once you have your hands on the prized poultry, your objective is to survive for as long as possible, as your score is slowly increased the longer you maintain possession of the chicken - but as a tradeoff, you become vulnerable to weapon damage, as well as leaving behind several indicators of your position, including a bright colored aura (which can be changed to various colors of your choosing), a trail of feathers, and of course the unmistakable clucks and bawks. All players without the chicken are unaffected by incoming damage. While the chicken is being held, they may occasionally lay a golden egg, which contains a random power-up inside, only usable by the chicken carrier. At any time, the chicken carrier can release the chicken by clicking their fire button, but they will not be able to pick up the chicken again for a few seconds afterward. By default, if the chicken is not acquired within 30 seconds, it will respawn to another random location.

In the TDM version of Catch the Chicken, the team with the player holding the chicken will accumulate points, and likewise, people on the same team as the chicken carrier will be able to take damage and become unable to use normal weapons, even if they aren't carrying the chicken themselves. "Normal" weapons is emphasized here because non-chicken-carrying teammates do get access to a new weapon called the Egg Gun, which as you might expect launches eggshells that crack into a fine yolky mess upon impact. These aren't your ordinary eggs though, because while they may do no damage, they have an incredibly high knockback, which can be used offensively to keep the enemy team away from the chicken carrier or push them into hazards. The Egg Gun's knockback can also be used to propel oneself in a manner similar to rocket jumps, but with much more height and zero damage, making it an effective tool for traveling around the map quickly.

Despite the mod's silly appearances, Catch the Chicken offers solid survival-based gameplay. Knowing your escape routes, where other players may be ready to intercept, and when armor or health is spawning (unless the server owner has disabled such pickups for the chicken carrier) is crucial for lasting as long as possible. At some points you may even find it beneficial to release the chicken at the last second to avoid a frag, in hopes that you can either grab it again once the cool-down time wears off, or can bait another player into collecting it and fragging them when they try to take off with it.

The chicken's behavior can be adjusted as well - besides its default slow movement, it can also be made to stand completely still, or on the other end of the spectrum, be given a much more paranoid personality, running and jumping away from players and even hopping to their death in certain cases. The latter mode is definitely the most fun in my opinion. You can also put more restrictions on the chicken carrier beyond taking away weapons, such as making them unable to pickup armor or health, making survival an even more harrowing experience. For server owners, there is also a command to instantly respawn the chicken at any time, which is useful in the event the chicken gets stuck. Finally, there is a "chicken cam" which lets spectators view the world through the chicken's eyes.

As a finishing touch, various UI elements have been given a barnyard makeover, with rickety wood planks splattered with egg yolks on some menus. 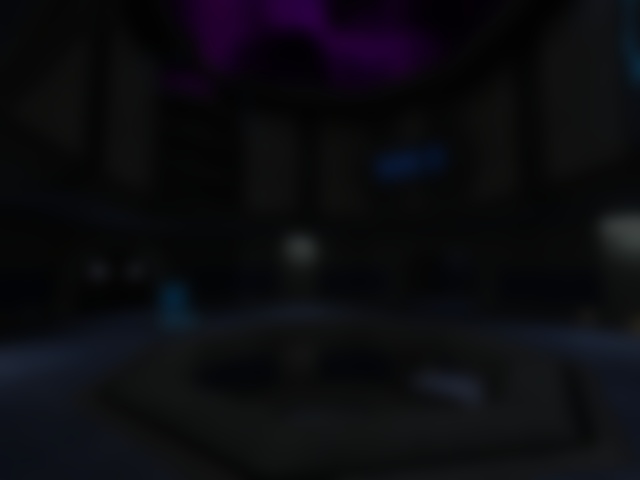