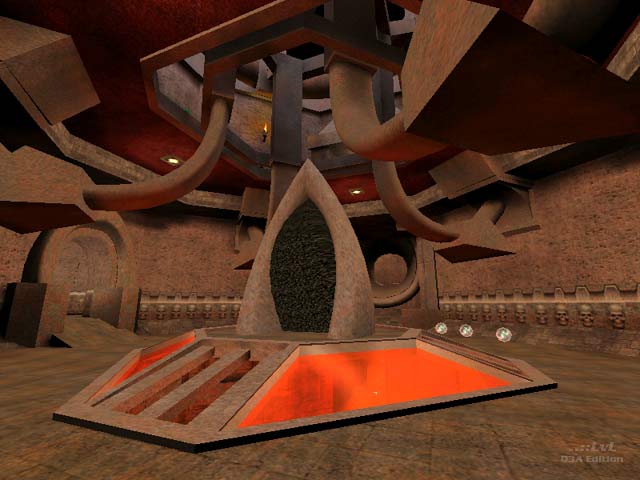 Handling criticism is part of being an artist...in any field.

Second: I was not criticising the whole curvy corridor (nice work there, yeah) but the playability in there is annoying.

4th: i dont wanna argue about this map being better than spwn3dm3 (Aeternal Nights). Why? Although is not as much detailed as this, it has its own layout, and is not a straight conversion from Dm6 (nor any other map.)

4th: Spwn3dm3 is pretty much done (not just a corridor). So stay tuned. I've been pretty busy last months, Real life just pisses me off.

5th: Plz, do not take any offence, im not intending on insulting you, nor criticising your job, no anything. I just expose my opinion, i'd love every single map to be as good as bal3dm4 or lun3dm3. I myself cant do maps as good as those, and are those maps which i envy, but i like to always press a bit, so that the mapper can think "yeah, that would be better". I do it a lot at quake3world, so its not just against you.

Agree (2) or Disagree (0)
Octovus unregistered
#6   06 Jul 2001
Um, I hope you and nanoSpawn are carrying something over from some other forum or the beta section and not just getting angry at eachother here....because nanoSpawn hardly said anything, ya know. Haven't tried this map yet but I 99% will if I have the time (I wish I had more of that :-)

Actually, I hope you two aren't pissed at eachother at all, but broadsword? He says he doesn't like the curvy corridor and says the same thing as cyberhazard about the aesthetics, and then you call him envious? Yeesh. I can't make a curved corridor either, and I don't happen to care, fyi ;-)

Agree (0) or Disagree (0)
Rebel Assault unregistered
#5   05 Jul 2001
Nanospawn, the map may not be perfect, but at least is finished. You have done two maps lots worse than this an a third in a process of construction that never ends.

Try to create a corridor like the Survivor´s curved one if you have guts.

R-Speeds got a little high though - 20k.