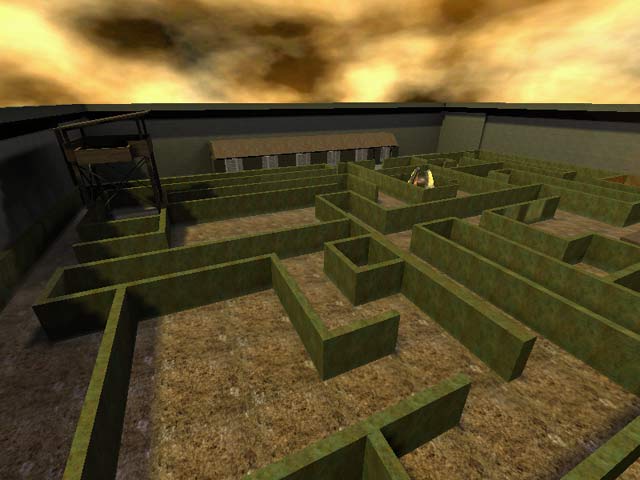 Kyall Rep. 317
#14   17 Mar 2012
The map is not too bad. You have to give him credit for trying to make a maze map. It isn't very easy to make a maze map that is both visually interesting and fun in gameplay. On the other hand though, I didn't like that it was a box map, and the skybox doesn't suit the map well. The layout is good, but would be better if the walls were bigger, so people couldn't rocket jump over them. The gameplay is fine, but I would only play with bots instead of human players, because humans would use cheap moves like camping or rocket jumping. Though it would be pretty fun to play with 8 human players on Freeze Tag. I suggest experimenting with new textures, and maybe get a few people to beta test your maps to see what they think before uploading the map. Maybe also try making some good architectural buildings, that you can enter and have fun exploring. Overall, a fair map. I won't be deleting it from my hard drive, but it does need improving in order for me to want to play. 6/10.
Agree (1) or Disagree (0)

KommissarReb (SW12) Rep. 2210
#13   23 Jun 2011
The tower was fun.
Maze was-interesting but doesn't fit the prison camp felling too well.
Impossible to reach the end teleporter (seen in screenshot) to reach the tower.
REALLY hated the lava for it did too much damage much too fast.

After taking points off because of the lava and sparse ammo and health - I give this a 5.
Edited: 20 Aug 2012 AEST

PaN61 Rep. 327
#12   20 Mar 2010
I have been playing this map a couple more times and I have noticed a missing texture on the side of the floor underneath the rail gun. I have tried the map with the Mapmedia.pk3 textures but the texture is still missing.

I have found the invisibility and the BFG which are placed in really hard to find places.

This is a really fun map, I love labyrinth and maze type maps so I definitely downloaded this map right after I saw it.

Agree (0) or Disagree (0)
Tscheckepp.... five years older unregistered
#10   23 Mar 2005
Hi everybody!
I don't know what I am writing this comment for, nobody is ever gonna read this anyway.... (if you do though, then post a comment, would be cool to see if anybody looks at this again)
Since such a long time has gone I guess I can say it now (hannibal has probably waited for a long time to hear this)
I PADDED THE STATS ON MY REDFOG MAP!
Sorry to everybody.... I was only 15 years old and didn't realize what I was doing.
But I DID NOT EVER FAKE COMMENTS ETC. ON MY OTHER MAPS!

Too bad the reliquary isn't around anymore.

@hannibal: I take back the 'Dickhead'. What map did you make? I'd like to see it

Your map red fog consistently made it into the top ten over at spankenstein's reliquary, despite extreme negative comments by more than a few individuals. It led me to petition (successfully) to spankenstein to remove the amazing amount of '10' scores the map didn't deserve. It is not that your map(s)was, is, are bad (Sorry, they are). It is the cheesey llama effort (made by ?) both here and at spankenstein's in giving such obvious BETA maps scores that truly talented mappers deserve.

Who am I? I am the nutcase who actually has downloaded 98% of the maps at LVL and at other sites, has actually played and saved to disk @ 1100 custom DM, CTF, Q3F, WFA, and Rocket Arena (among others)maps. Your maps, sir, are ASS.

Oh, and one other thing: yes, it is true that I haven't made a map yet. I would have liked to have made one but I have been very busy. I have given advice to Condorman, who made the Q3F map Condorman's Great Outdoors, as well as given advice to Dup10's forthcoming Platforms for Q3F. But guess what Tchkepadfaldskfj? This dickhead CAN make maps, especially poor ones like yours. Takes about an hour. I just know not to release them.

But now I am inspired.

Listen up tshcckjfgaljl;#$. I will, in the next two months, release a map under a psuedonym. (So llamas such as yourself can’t llama flame mail) Then, after the map has been received by the community I will reveal in a special way to all, that the map has indeed been created by hannibal. Keep your eyes peeled and remember : you asked for this.

But hannibal. Who the fuck do you think you are?! If you don't like my maps - fine. That's your opinion and I respect that. But don't accuse me of padding the stats. Maybe some people like my map. You should respect every mapper. Even if there maps are lame. The mappers take their time to make a good map, so other quakers have fun. People like hannibal are dickheads that can't even make a map and then they insult other mappers.

I am waiting for you, hannibal, to make a better map

Agree (0) or Disagree (0)
hannibal unregistered
#4   14 Oct 2000
once again i find bogus comments about this mapper's work. every map that this individual has done have been ... <ahem>

the only redeeming thing about this map is the witty comment by tig about prison camp. marine boot camp was also more fun, especially the first month.

Gameplay is there even with rail,

Agree (0) or Disagree (0)
Big Freakin Gun unregistered
#2   10 Oct 2000
This level is quite fun actually. The only thing is that the bots just hang around the building with the 4 doors and maybe go into that corner of the maze. It would have been nice if they navigated the entire maze without crowding into one area. But with human players it becomes a rail gun camping contest. That should be removed. Man the one-on-one i played with my friend on this one (railgun banned) was so fun. Searching for the other person in the maze can be really intense! Textures arent terrific, but what do you want it to look like? Its a maze! 7 out of 10
Agree (0) or Disagree (0)
FooL unregistered
#1   09 Oct 2000
I don't think this level is as bad as Tigger-oN lets on. I think the author has tapped into something really kewl here. I've often thought about what kind of level I would build if I were talented enough to do so. This kind of level always comes to mind. I think everyone has said at one point or another...."Man, wouldn't it be kewl to have this level you could just lob grenades around and hope you hit something?" Hasn't everyone thought it would be interesting to make a level out of a Wal-Mart or something with all those isles?

Well the sad fact, is that though they sound fun....these levels often leave much to be deisred. And this map is no exception.

The map simply needs more stuff in it to be playable. More weapons. More ammo. More health. An overabundance of crap everywhere would make this map so much better. Enough health to rocket jump over the walls and not think twice about where the next health ball is. Enough ammo to just sit back and lob grenades for a couple of minutes just waiting for that sound.....and maybe even a "you fragged shithead" message.

But sadly no. This level is crap. 5 outta 10 for trying to bring something new to life. 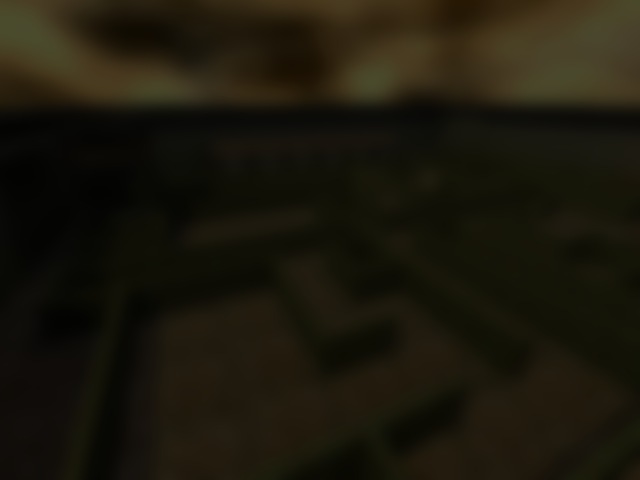