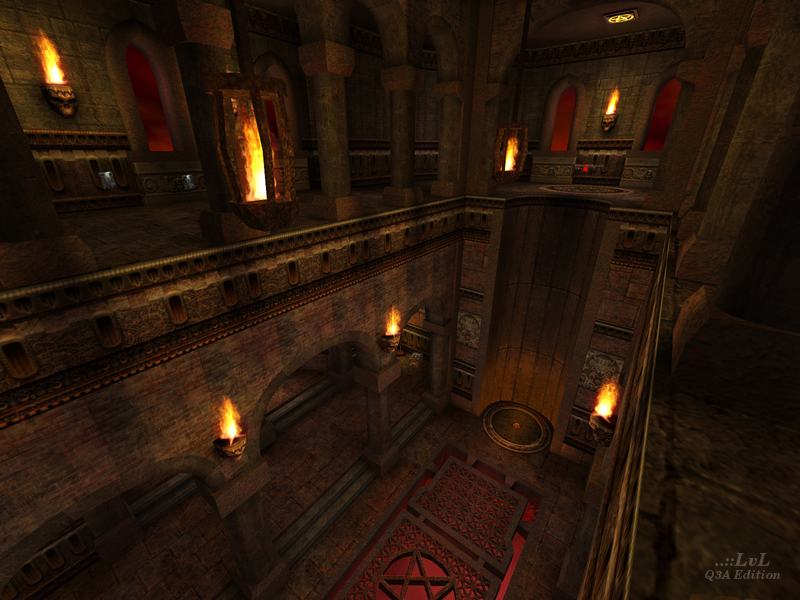 (Steinecke actually rating a map as wonderful?? Hell it's gotta be good, i'm off ta get core as well!)

Agree (0) or Disagree (0)
Steinecke unregistered
#9   17 Jun 2000
Somehow 'Golgatha Core', another map made by 'PowZeR', has been forgotten. That's not understandable; it's a wonderful map! Have a try! Great gameplay, great look! A must -if you have GeForce-power!
Agree (0) or Disagree (0)
Steinecke unregistered
#8   17 Jun 2000
Bot play is not pretty got, 'cause there is one jumppad-problem. Map is not as beautiful and enjoyable as 'Golgathe Core has been.

They 'diving' framerates can be stopped by investing in a GeForce- card.

Agree (0) or Disagree (0)
Hi-C unregistered
#7   16 Jun 2000
Looks very impressive in construction, but also another carbon copy of the id house style. When exactly did burning skulls, big leering many-toothed monster paintings, and grates over fog turn into bad cliches?
Agree (0) or Disagree (0)
QuiktimE unregistered
#6   16 Jun 2000
Great map, great gameplay, keep it up PowZer
Agree (0) or Disagree (0)
Hobbes unregistered
#5   16 Jun 2000
I agree with Johnny Law. The map only has 2 real combat areas with probably too much halls between the two. Almost like a much more vertical Q3dm1 in a way i guess (sorry if that comes across as a mean or harsh comparison). Had there been a significant combat area(s) down at the ssg and gl (maybe positioned under the RL area so that some form of viewing access could be given) The map would have had 3 points to flow thru to and the RL area would not have felt so out of the way. On a performance note the map runs alot better than the authors first effort which is great but I still think that the railgun area takes a touch too much of a fps hit. A suggestion would be to take out every 2nd column on the railgun level. I would also recommend removing the columns in front of the windows on the floor below the railgun as they just feel to clutter and restrict the available area of movement down there.
Agree (1) or Disagree (0)
Captain (Horatio) Chaos unregistered
#4   16 Jun 2000
Pages at this sight seem to be loading very slow, is it my connection or is anyone else experiencing this?
Agree (0) or Disagree (0)
PowZeR unregistered
#3   16 Jun 2000
If anyone is having trouble downloading "A Dark Secret" head on over to my site:

you will find two links on the maps page...

Agree (0) or Disagree (0)
Johnny Law unregistered
#2   16 Jun 2000
It's a well-built map that people should download, but not quite up my alley with its gameflow. Might as well do a C&P of my Q3W-board post:

First of all, this is a great-looking map in many ways, especially the architectural flourishes like the view in the outside court. I'm not going to address its looks anymore -- they're just fine, and you've got lots of other people telling you the same thing there.

But after playing this map a couple of times, I really don't have the urge to go back to it. Why is that? Well, three things.

1) The map is completely symmetrical. I'm sure you've heard the saying that a symmetrical map is half as interesting. That's overstating the case to make the point, but there is a kernel of truth there. A symmetrical duel/FFA/TDM mapcanbe good, but you're giving away a lot of chances to create more interesting spots by going that route. Personally I'd say to leave symmetrical maps to CTF... if you have the urge to "commit symmetry", do it in restricted locales, but not over the whole map. This isn't a major strike against your map, but it did noticeably lower its "interestingness" for me.

2) There's a lack of truly interesting combat areas. The outer court is basically flat. Between the court and the main atrium there are some halls, which aren't that inspiring as fighting locales. The main atrium has some good things going for it... particularly, fighting among the columns down on the main floor. But combat on the ring of the upper floor isn't that exciting, and fighting between the floors is hampered by the distance and the upper columns. So there are some cool/fun combat locales in the map, but not an abundance.

3) Maybe most importantly, the overall layout of the map is linear. You do have some circular connectivity on the "micro scale", in individual locales, but a good DM map needs it on the macro scale (with at least one crosscut) for more interesting and varied gameflow.

Them's my opinions anyway. I'd say if you took most or all of the powerups and holdables out of jk_tourney1, it would be a more fun map than this one (performance issues aside).

It's definitely a well-built map, from a technical and aesthetic standpoint, and it's good to see you executing a different style than in your previous outing. Keep it up.

Agree (1) or Disagree (0)
Octovus unregistered
#1   16 Jun 2000
After being damn dissapointed by r33t ownage (which it was not), I loaded up this map. WOW! I was not dissappointed. Frame rate friendly and all.

The rl room looked to me like it would be a focus of the map, what with Megahealth. However, the bots (with the exception of Anarki) disagreed. I think this is good, as it is a one way in and out room, I don't tend to like those. However in this case it made sense, that was the only place I found rockets (no ammo elsewhere if I'm not mistaken) which means you have to get rockets from there.

The rg was classic, facing the ra which itself was placed on a treacherous ledge. Grabbing the RA, armor shards, and then the +5 healths with a rocketjump (or a strafe, if you can do them right wishes he could) seemed a good technique.

The gl next to a 25 health and the sg next to a 50 initially struck me as a what? but considering the little health around the map, it was well placed. In this map with lots of ledges, the gl is much better than sg (hence less health next to it)

The organic wall insets, complete with skulls, ambient sounds, and even a skeleton of in one corner, made the basement the coolest (if not most useful) part of this map.

Grab this gem now, 9 outa ten because of rl room and one bug therein (I think it's a bug) You can rocketjump to the ledge above the megahealth..if that's not a bug, I think it should be taken out anyways. 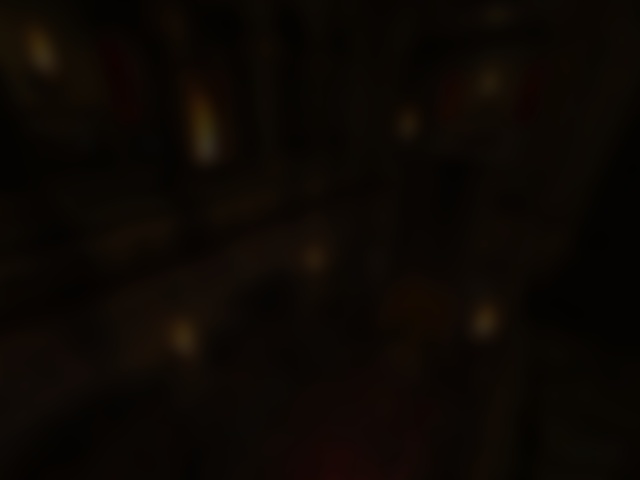