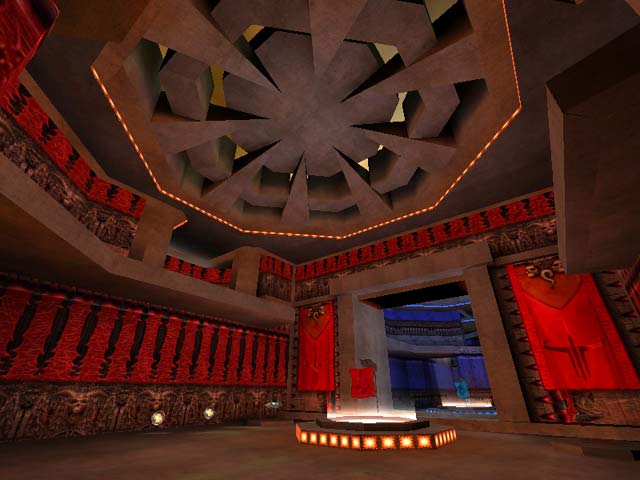 themuffinator Rep. 978
#19   01 Feb 2011
I remember playing this map years ago. This is one hell of a fun map and features some very interesting ideas not seen in any other CTF maps. If you haven't tried it, give it a go!
Agree (0) or Disagree (0)
I_like_quake unregistered
#18   01 Dec 2010
This map is not the best looking map out there, but a hell of alot of fun especially playing with hardcore bots, which can really be a challenge and sometimes really frustrating.
DOWNLOAD NOW!!!!! and jump into the fog o death at the bridge!!! : )
Agree (0) or Disagree (0)
Drunken Boxer unregistered
#17   26 Jun 2000
I've played this map on a custom map server and I have some problems with it. First, it really slows down my machine. It's a FPS killer. Second, the doors are way too slow to open. Often, we were stopped by slow doors opening. Third, the middle area is a railer's paradise. May be good for some, but not for me. I wasn't happy with the lighting or the really steep stairs.

On the plus side, the Squisher was a nice touch and kept us very amused the whole game. I also liked the glass between the two bases. Too bad the rest of the map did not keep us so amused.

Agree (0) or Disagree (0)
FooL unregistered
#16   18 Jun 2000
GOOD GOD!!!!!!!! I'm sorry I haven't posted on this map for a while. I've just been playing it sooooo much! This is what CTF should be. 2fort2 may be old, but in this case it works. This author definately has a firm grasp on what makes CTF levels outstanding. One thing though: While playing this map with T.E.C. mod, it was a little too easy to capture. Rocket ledge to rocket ledge with the grapple. Flag cap in t minus 8 seconds tops. I would like to see what this author comes could make with the T.E.C. mod in mind. ('cause let's face it, we CTF lovers LOVE the grapple!)
Agree (0) or Disagree (0)
Meatboy Dogfood unregistered
#15   18 Jun 2000
Fun, Fun, Fun.

Moves swift with no dead ends. Spots for lurkers snipers, but watch your back. The execution chamber is a sick and twisted concept who's time has come.

Down load this puppy and play. Congrats to the maker.

Tig didn't mention that if someone falls into the fog, they are squisehed in clear view of both bases! Mwooohahahah!

This is a great map, get it now!

Agree (0) or Disagree (0)
Frag of Death unregistered
#11   19 May 2000
Just an all around excellent map. Download it.
Agree (0) or Disagree (0)
Praxxus unregistered
#10   19 May 2000
This is one of the best maps I have played. It is layed out very well and the team play is awesome. The access to the weapons in which to defend the bridge are great. The public execution is absolutely hillarious. There is nothing like watching someone with the flag get squished. Thanks for a great map to play.
Agree (0) or Disagree (0)
Captain (|Horatio) Chaos unregistered
#9   17 May 2000
Firstly, I must say that I am really tired of Id's Gothic textures, and would like to see some CTF maps set in REAL space environments (view of Earth, Nebulas, etc)like what's being done Unreal Tournament (I'm a Quake fan by the way).

That said, I think this map has a good layout and is well connected. The structure of the map allows for interesting strategies to be adopted and may make for stimulating gameplay.

The architecture in general, was very nice, and I especially liked the outdoor area with the inclusion of all those columns and the four Gargoyles watching over the proceedings.

involves not falling into the fog.

yeah mike, the map is preatty hard(at first) but playin this map.. games are actualy NOT a WASTE OF TIME like SOME maps..

only thing is fps..wack in some areas..wont stop me from playing the map though..

This is the toughest CTF map i have played. With 2 people on each side laying down a steady and constant stream of pulse fire..that makes the long bridge .."no mans land"!!

This was so fun. This map actually felt like a team map rather than a "im on your team but ill do what i want" You had to stay in strategic locations to win. The capture guys had to watch each others backs to get in and out. This map forces players to play CTF like you should play...AS A TEAM!!!! Im Keeping this map.

My only beef with this map is that the frame rates drop in certain areas.

9/10 Great archetecture but it wasnt designed for high frame rates. Game play in this map has yet to be matched. Download this!!!!!!

Fortunately I got past my initial impressions because this feels like it could be a good map. :-) Visually only some minor problems (if you like gothic) -- texture misalignments on the floor, and the lack of curves in places that really call for them. Structurally, it's got good proportions, multiple paths in the right spots, and looks like some good potential for fighting on different vertical levels. I'd enjoy giving this one a try on any server that would care to run it.

BTW -- is it just me, or has framerate with bots really taken a nosedive with Q3 1.17? Before updating to 1.17 I could play bot 5v5 no problem, now though my framerate drops down to 10 when I try that. (Not just on this map, on all maps.)

Agree (0) or Disagree (0)
not entered unregistered
#3   14 May 2000
Very nice feel to it. Open over all, except where the bridge is, which is a perfect place to tighten things up abit.Each side of the bridge is well fortified. Upper defenses on any team must be addressed. The game will be won and lost in this area with evenly matched teams.Loved the humiliation fog of death,and the fact that you can see and study your apponent between a glass wall separating opposing flags.The glass wall also adds to the comic relief department. You get to see the results of any miscaculating jumps in the fog of death.By the way,is the upper level to the flag, shaped like a scorpion (with 8 legs) on it's back done intentionally?
Agree (0) or Disagree (0)
Glucose unregistered
#2   14 May 2000
I just have 1 thing to add to Octovus's response, and that was the placement, and usefulness of the GL. Commonly, I hate that weapon, its useless, and I'll never use it if I have something else. But in this level its a very useful weapon to guard the bridge with. From the Balcony you can fling them onto the bridge and the explode on the little raised platform the powerup is on. Its a good technique to keep that bridge from being used. Other than that I agree with your comments :)
Agree (0) or Disagree (0)
Octovus unregistered
#1   14 May 2000
I give this map a 7.5, but that doesn't exist..an 8 therefore.

It kind of felt like the whole lower floor base area was just an area to charge up before you got out and into the action. Not that it was necessarily bad...just very weird in that way (if you ask me).

The RL was well placed as was the megahealth. The powerup was central..nothing new but it works. Also the GL? Pointless in a map like this its practically useless.

I liked the see-through flag room walls. It's been done and it will probably get old soon but hey use it while it's "cool". At first glance, the jump pads look pointless but in game, they are actually a very strategic element: Another way for flag carriers to escape with your flag, another way to run into the enemies base, another way to (fill in the blank). But bots didn't use them that I saw =(

Last but not least, I liked the public execution area. Good thing to name the map after ;). The "humiliation" ringing through the air just added something to it all. Simple middle area, power-yourself-up-so-you-won't-die-outside bases, but amazingly enough it worked and bots were fine. 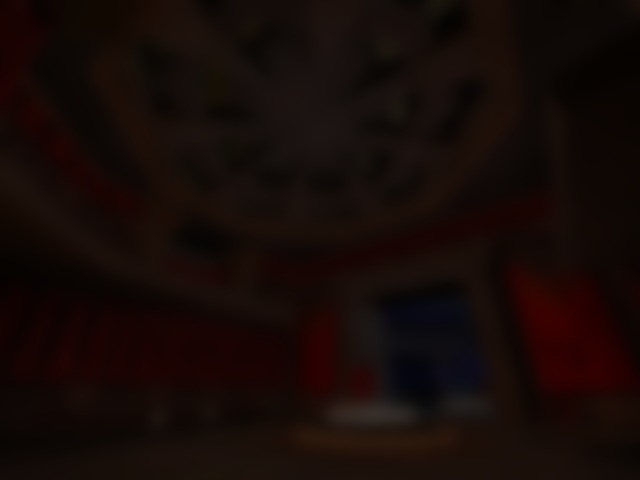