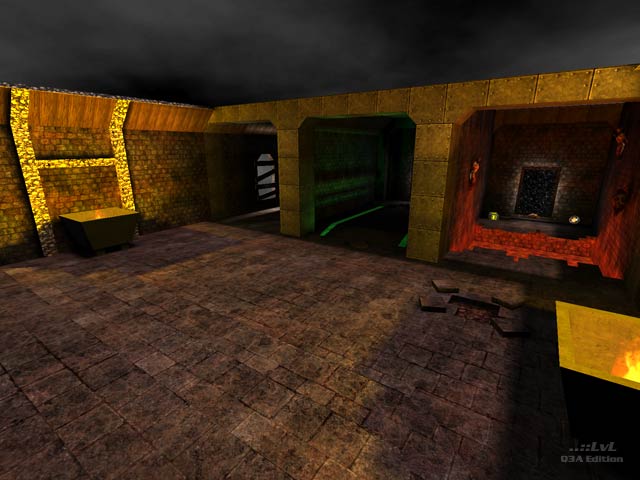 Kyall Rep. 317
#13   28 Jun 2012
Seems like a pretty good map. I haven’t played the original map, nor have I used or know what the Generations Arena is, but I tried it with the original Quake III Arena, and it wasn’t too bad.

The gameplay was intense. I’m not sure how it is supposed to be played on Generations Arena, but it was pretty fast and strong without mods. With only 4 nightmare bots and me, there were quick frags and a lot of blood. The bots were average though when it came to tactics. They recognized that there was heavy armor near the water, and tried to claim it, but seemed to get stuck. I think the area was a little too small for them. Bots also did not know how to get to the quad damage, or even know that there was a hole to get to the portal. Bots mainly stayed at the two main rooms that had the most portals. Other than that, they put up a good fight. The use of many portals was pretty fun. There were a lot of invasions of personal space, but I can’t say whether this is a good thing or not lol. The area was a little bit cramped (Out of the 80 frag limit, I managed to get about 13 gauntlet kills).

The textures were great. There was a great variety of different textures found throughout the map, each of them enhancing the visuals of the map. I liked how the bricks fell out of the wall, revealing the circuits. I also liked the black, void-like portals. Were they from Quake I?

The sounds were fine. Though the text document said there were no new sounds, there was a new sound when entering the room with the quad damage. Don’t get me wrong though, it was a pretty good choice for a noise, I found it funny every time I went in there too lol.

Overall, it is a good map and a keeper. It should be fun to test with real people when I’m at school. I need to check out the mod that it is supposed to be used for though, and also the original map. 7/10

SW12:
set cg_playerColorLevel to 192,
set color1 and color2 to whatever you like.
That should get Ranger's custom colors working..

Tabun Rep. 102
#6   11 Sep 2010
No to toot our own horn, but the switch from .99d to .99f is never a bad idea. The mod has improved a lot since .99d (and much since .99f too, but the new version isn't out yet..)
Agree (1) or Disagree (0)
SW12 unregistered
#5   09 Sep 2010
Now, Normally the Doomers try to range attack me with their chainsaws rendering them helpless. Half the time they will utilize weaponry like the Super Shotgun, Rocket launcher and pistol. I've never seen a bot with the BFG9000 or BFG10k. I should consider getting 99f, but I've been lazy and lost some of my interest. Had this map but I eventually took it off. Might put it back up. I still can't wait for version 1.0 to come out. Its going to be Awesome. Lets hope like 99d, It will have no problem loading the mod.
Agree (0) or Disagree (0)
McDeth unregistered
#4   09 Sep 2010
I had to double check my Generations Arena install. It is .99f, which according to the website is the current version.

The bots did seem to like to hide around the corners in the central room... Doom got me a few times with the shotgun as I was coming out of the hallways at that junction.

Agree (0) or Disagree (0)
SW12 unregistered
#3   09 Sep 2010
You Have the generations Mod too? Do you have Version 99f? Because I have 99d. I played it with Generations Arena too. Was frustrating when I tried to have near to only Slipgaters. Stupid Arena Gladiators Want to horn in when they aren't wanted.
Agree (0) or Disagree (0)
McDeth unregistered
#2   09 Sep 2010
This is a pretty well made map. I'd definitely recommend that everyone give it a try and make up their own minds.

I do agree with the reviewer on a few points.

It seems that the scale is not entirely consistent. The center room, where you find the entrance to each episode's hallway, does feel confining in particular. The hidden area, where you would have originally went to fight Shub-Niggurath also feels a little tight.

The big bars that lift up in the flooded room take way too long. This is especially problematic if you're coming out of the teleporter behind them.

There needs to be better clipping in the lava hallway. I was able to rocket jump OUT of the map through this area.

Other than that, I think that the basic construction is solid. The textures seem appropriate, if not a bit limiting. The lighting seems average. The map does have a lot of nice little details though. The falling water from the floating pool is a great idea! There are also plenty of spots where damage has been incurred through battle, revealing a technology beneath the gothic facade.

I played the map using the Generations Arena mod. Despite some flaws, I'm definitely going to keep it on my hard drive for future play! :) 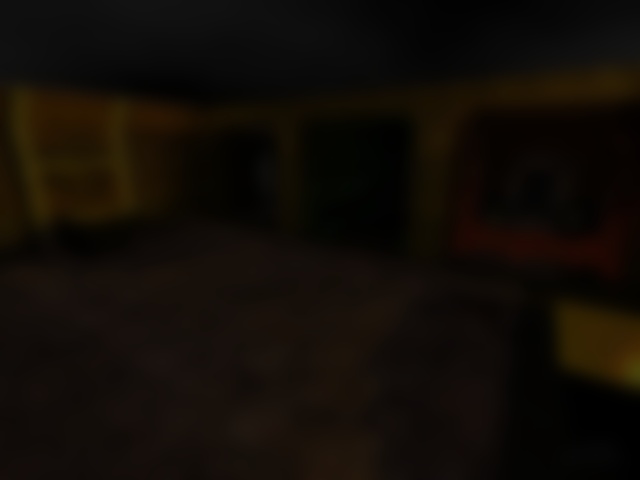