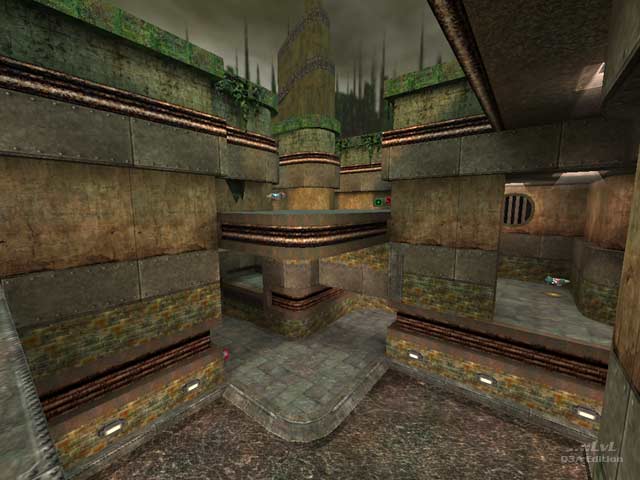 KommissarReb (SW12) Rep. 2210
#20   26 Oct 2014
@EmeraldTiger & themuffinator: That is very true, unfortunately. That 'elitist' attitude you mentioned is also prominent in games like Team Fortress 2, Jedi Academy, Warcraft III, SWTOR, and especially DotA 2. It kills the reputation those games may have had. Moderate players stop playing, and all you're left with are a bunch of jerks who harass any new player for not having all the bells and whistles the veteran players have from playing 24/7 after reading every rule, cheat, etc. They then spend their free time getting gadgets for their characters, which are usually in much better physical shape then the players themselves.

That out of the way, I think this map has a lot going for it. But rain would have made it cooler IMHO. And what's really so great about CPMA anyway? Does anybody even play that anymore?

The comments here really do highlight the ignorant culture of the elitist ProMode'ers and why CPMA was a contributing factor behind killing off Quake for good. How could the game attract new blood when the vast majority of Q3 servers were CPM and filled with kids who are obsessed with virtual penis-size comparisons/ego boosts from shooting pixels at each other? That doesn't help retain new players, and this mentality has spilled over to QL too with similar consequences.

As far as I can see there is absolutely nothing wrong with this map. Those nerds who seek absolute, 100% competitiveness should go play a real sport. You can't make a map 100% balanced without making it perfectly symmettrical so that players who spawn randomly are not better/worse off than someone spawning somewhere else. That said, it'd be a pretty damn boring map, almost as boring as Hubster's Dismemberment. You try so hard to be 'competitive', and in doing so you lose everything a game should be - fun.

A classic duel map has one crucial factor - an imbalance that can be exploited. That makes for interesting matches. DM4, q2dm1, pro-q3dm6, etc., all have a slight imbalance and that is what makes them entertaining. Why should this map be any different? If you think the RL is in a 'sweet spot' and think that one can simply camp it all match and win, then you really don't know what you're on about. To every so-called 'flaw' in gameplay, there is a strategy to conquer it.

EmeraldTiger Rep. 2432
#18   10 Oct 2011
Wow, I read the comments for this map, and Im like... harsh much? I dont see how the item placement is unbalanced at all. Yeah I suppose you could use the tele below and double jump in CPM then grab RL and YA very quickly... but that is extremely difficult. Ive failed on several test attempts, so just imagine how hard it would be to do during an actual game. By that time someone probably already got your shiny yellow armor and your RL - which in turn gives them the stack necessary to potentially regain control. I dont think one should be quick to say a map is unbalanced just because of one, nearly impossible jump.

Personally I think it is a nice fast-paced arena. Not the best map ever to be sure, but its not as horrible as some make it out to be, and its got good looks to score on too. And besides, isn't fun more important than all that competitive stuff? I respect people`s opinions, but sometimes these people can have a tough attitude...
Edited: 10 Oct 2011 AEST

Agree (4) or Disagree (0)
Octovus unregistered
#17   23 Jan 2002
It could certainly work as a arena style level. My main issues were with item placement, the layout itself could work great. Your comment about not playing vQ3 much (at all? I'm slightly confused) makes perfect sense, the interpretation I got from someone else was you made this map in order to play it in vq3 but never once tested it in that gametype...which it seems isn't true as it's intended for arena gameplay. Anywho. Can't wait for the next one.
Agree (0) or Disagree (0)
The Hubster unregistered
#16   23 Jan 2002
Polo: I look very fwd to your next map. polo3dm3 was a fantastic trip back into the old days of QW. No doubt you have something excellent up your sleeve!

This one is not "bad" per se, just not right for a competitive level. And given polo3dm3, I was expecting something of competition calibre.

Keep up the good work - you're doing pretty good in my book. Its just that I myself prefer maps with strong competitive gameplay in mind.

the reason of this map : after polo3dm3 i have made a vq3 map because i think nobody play polo3dm3 (or just promode players) polo3dm4 is a sort of "marketing map" i know the good players can't play this map. it is a sort of ra3 duel arena. but also some people who play customs maps seldom can learn it quickly and have fun with it.

promode players who can run and jump >> polo3dm3

hubster: my next map is a real cpm one but bigger (also the last)

... and CPMA is all that matters:P > ok.. for me but just when i play, when i map i prefer make differents sort of maps.

Is this the first FPS level you have ever played?

/me shakes my head

When I saw that polo had released a new map, I jumped at it, imagining what the creator of polo3dm3 would have delivered next.

Yes, the visuals are nice, no doubt about it, but the gameplay of the map brings down any chance this map had of being a solid stage.

I agree strongly with xfoo - the RL is very badly placed, infact one doublejump from the tp exit near PG and your at the RL in one bounce. Very dangerous.

The angled edges around the water make it very easily to get stuck in certain situations, unless you're lucky enough to make the doublejump to RA from water's edge (and mind you, the water could've been shallower, it acts like quicksand. Given the size of the water area, this is a very big fatal trap).

I would have added another tp in this stage, perhaps near the water near the SG.

Movement around the level is not easy - some jumps out of tp exits are marred by low ceiling which leave you banging your head and having to slow down.

The distance of the jp to upper tp is dangerous and very crammed. With the "quicksand" down below, you're either JUST safe with RA, or toast without.

Sorry to sound so harsh polo, but I am disappointed. The map is fun, make no mistake, but given your last release in polo3dm3, I was expecting something of equal to higher calibre.

I'll keep my fingers crossed though - your last release was a mindbender imho, I really do love it.

I look fwd to your next release, after all, each release is another notch in the post of learning;-)

Actually polo told me yesterday that this map was created with vQ3 in mind .. but he only playtested it on CPM :]

try to hide behind a rock

I love how people consider vQ3 such a godsend to playtest maps that are made for CPM :]

Agree (0) or Disagree (1)
Octovus unregistered
#7   21 Jan 2002
Hmm, thanks for the first line xfoo. Along the lines of what I've been wanting to say for ages though I couldn't put it into words :-p

nanoSpawn...are you saying judging a map based on bot play is veeeery wrong? If so I tend to agree but it's damn hard to try these things out online. 95% of the servers out there run only vanilla maps, and your chances of getting online to a custom server with players who have the map and are willing to rotate to it...well. It being in osp helps of course.

How can you grab the RL from that ledge? There is a overhanging roof so you can't possibly rj right from it, maybe you can from below but why should you when you can just teleport again? And with bots they come blaring in and out of the tele right next to you like nobody's business, you'll be telefragged in seconds. I respect your opinions...but seeing as I think it's a pretty crappy map, I legitimately think it's nothing new. If that's what you think, great; but don't put what I said in the context of your opinion, as they are obviously very different.

Anyways, this map was released in the OSP map pack (forget the number), and I had a chance to look at it then. There are tons of 'balancing' jumps in cpm (such as the lower level 50 jump and RA jump), but the ability to get RA, then only having to do a simple strafe jump to YA makes it fairly... gay. Rl placement is horrible because it's such a sweet spot to sit at. You can watch the two main ways up, cover the RL, watch RA and get YA from there. The only chance any player has it seems is to wait for the UP guy to leave to get RA, then run like a bitch and hope the RL and YA are there. (or to take the tele, quickly go back, and grab the PG (hoping the UP guy doesn't have the LG)).

But anyways, fun map, nothing great though, 6.5 from me.

Agree (0) or Disagree (0)
nanoSpawn unregistered
#5   20 Jan 2002
uhm octovus, must disagre with you in that, specially since you've pointed out you played it with bots, veeery wrong.

That empty ledge has certain strategic value, specially for the teleporter, and because it's easy to grab the RL from there with a circle,not pointless, but used a lot in a real tourney game...

Besides, this map owns in CPM, although it plays almost the same as cpm1a, the faster one wins, no doubt...

Just some random thoughts, i've played this map a lot, and always enjoyed it, it has its flaws, like the maps is pretty small, but not every single tourney map has to be big and strategic

Agree (1) or Disagree (0)
Octovus unregistered
#4   20 Jan 2002
Uh...going against the flow I guess (don't I always?). The map looked pretty cool, I'll have to admit. But the bots (and the layout) are semi-retarded. Especially the teleporters. Both the bots and I recognised the pointlessness of the middle tele in the chain - one that is just above a pool of water that has the SG. The only thing on it's ledge is...nothing. Only an opening for the bouncepad back up. So of course both the bots and I always jumped back into the tele to go to the second destination, which was near the PG, RL, and (if that's not enough) GL. Removing that middle destination would have improved flow tons imo. The sound of teleporting sure got annoying fast.

Agree (0) or Disagree (0)
rokscott unregistered
#3   20 Jan 2002
When I first entered this level I thought it looked OK, but didn't think the layout seemed to be all that great. Fireing it up with the bots was a different matter though. Gecko is right, the gameplay is very good indeed. 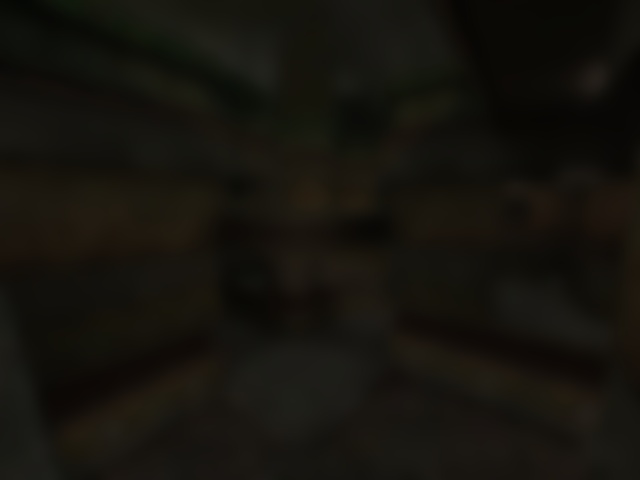