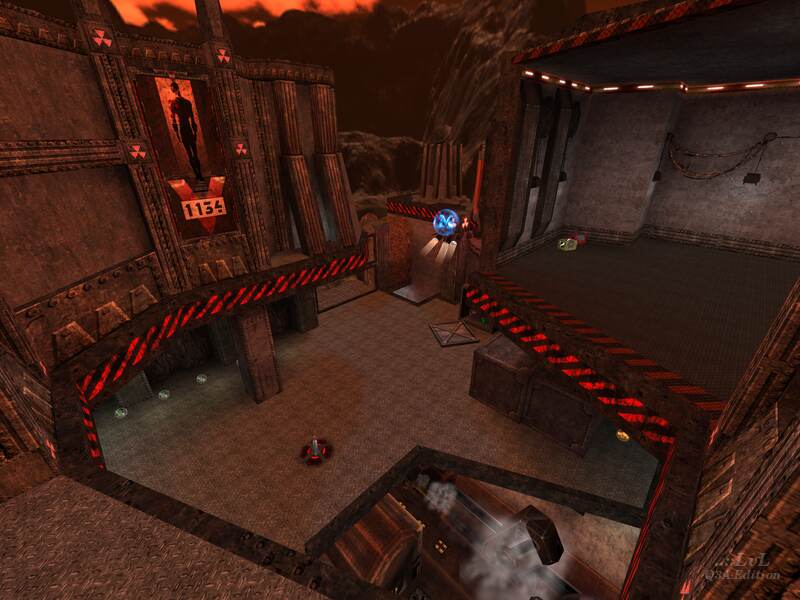 Engine is a textbook example of a map that excels in visual appeal, but leaves any regard for balanced gameplay in the dust. Maps like these always leave conflicted emotions, since a high amount of effort has clearly been expended, yet from the perspective of a player it leaves a lot to be desired.

The map's namesake centerpiece is a giant, steam-powered apparatus with a pleasing amount of attention to detail. A pipe in the back transports the water - which you can see through the glass parts - to a visibly firey furnace which then boils the water, passing the steam through more pipes (which also let you see the steam passing through) to a pair of large pistons, which are connected to two contraptions with vertically-moving shafts; the vertical movement of these shafts combined with the horizontal movement of the pistons creates an overall circular motion that turns a pair of wheels, which finally transfer their rotational energy into a device that converts the resultant motion into electricity. It's really mesmerizing to watch, especially given that this was all done on the id tech 3 engine.

The rest of the map certainly isn't bad looking either, being decked out in Rorschach's Vendetta texture set which is appropriate for an industrial environment housing a machine like the one this map features. The setting is fleshed out even further with exposed wires, pipes, satellite dishes (one of which even rotates), closed barbed wire gates, a forklift next to some crates, and a section of the facility (the Quad room) where the ceiling has been damaged and a light fixture can be seen swinging, possibly ready to drop on an unlucky player's head at any moment.

Sadly, the aesthetics are where most of the compliments towards this map end. The item placement is fraught with some major transgressions that severely damper this map's playability. The most egregious one being that the RA and MH are not only within sight of each other, but can easily be collected in one fell swoop in around 3 seconds, by taking the bottom jump pad right below the MH. When two of the most powerful items in the game can easily be grabbed by one player with little effort, the balance of the map just falls to pieces.

The closeness of the RA and MH isn't the only issue, however. There is a RG located on a suspended platform that is adjacent to a small room with 2 slug ammo boxes, turning that area into a camper-friendly hideout, especially with all of the flying around players will be doing with the jump pads in sight of the sniping platform. It isn't perfect, sure - there are higher levels where they can be flushed out from above, and a side jump pad where players can sneak up on them, but putting slug ammo boxes right next to the RG is pretty much never a good idea regardless of counters, since the camper themselves doesn't have to compromise their position to restock on ammo.

The quad room feels almost tacked-on compared to the rest of the map's natural flow, being accessible by only two L-shaped hallways leading back to either the engine or forklift rooms. This also means that the quad room is very easy to defend, as only two entrances have to be watched and their narrow, flat nature makes them extremely bad choke points that can be flushed out without too much trouble, all without being at a height disadvantage, either - and there's even some ammo boxes in the hallways for defenders to grab, too. A good rule of thumb is that any major item you want players to fight over and defend should have at least 3 ways in and out, and preferably with some Z-axis gameplay to make defending more challenging and to add dynamism to combat.

There is also a side room with an elevator that, while neat, is also painfully slow and just grinds game flow to a halt.

Finally, the very bottom floor where the engine sits on is fairly devoid of items, save for some armor shards, a little bit of health, and a GL. The levels with more height advantage offer much more in terms of protection and firepower.

Despite these faults, the map is far from a lost cause. The main room with the engine has a solid vertical design with enough open space to allow for breathability in fighting, but also enough cover to retreat behind if needed. With some rethinking of the side areas, and a major overhaul of the item placement, this map could go from merely being a neat piece of eye candy to something that is actually quite playable. A cool start would be to move one of the major items onto the engine (or the platform right next to the wheels / electric generator), making the map's set piece a focus of not only visuals but also gameplay, and giving players a reason to fight down there too. Remove the slow elevator, and redesign the quad room to have more connectivity and vertical action to help it flow more cohesively with the rest of the map.

Because of this map's severe gameplay shortcomings, this map is not likely to stick around on your hard drive for long, but it is nevertheless worth downloading as it is a fantastic demonstration of the author's imagination, creativity, and technical prowess. If nothing else, check it out for the steam engine alone. 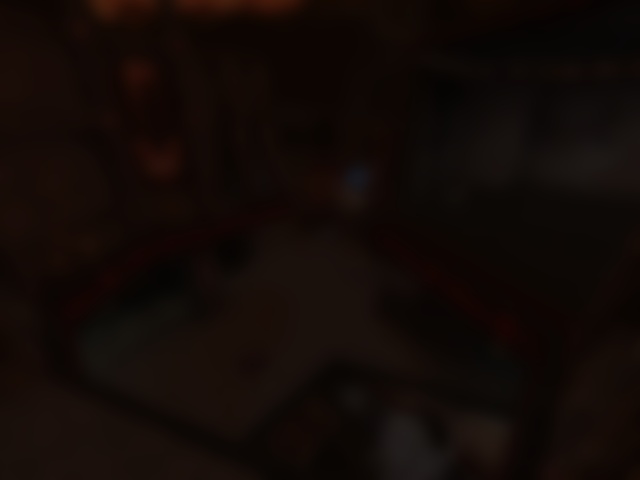