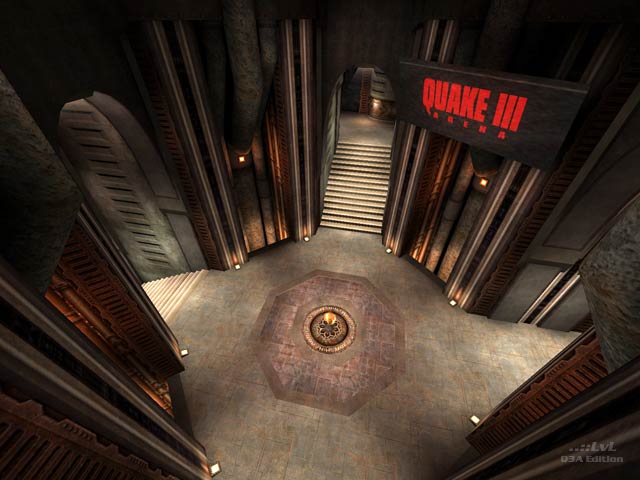 "Agony" is sst13's re-visualization of one of the Dreamcast split-screen maps of the same name, (.bsp name dc_ss405) which was in turn a Quake 3 remake of the Quake 2 N64 map of the same name as well. After much careful refinement, sst13 managed to breathe new life into a formerly drab environment with some masterful craftsmanship.

The arena is petite yet highly vertical, in both the layout and in the aesthetic design, with the walls going upwards towards a seemingly endless black void above. There are four main rooms - two in the center which are placed above and below one another, with four little holes that can be used to drop from the second floor to the first, which has a PG in the center. Towards one end is a room containing a YA at the first floor and a RL on the second floor, with a jump pad at the corner for easy accessibility. A staircase adjacent to the YA takes you to the SG and a jump pad leading back to the central hub. On the other end is a slightly more complex room with three levels - the top has a GL which can be accessed from a staircase stemming from the center, and a YA on the first floor next to a jump pad sending one to the second story. One of the paths to the room is a corridor from the other side of the map, containing some shards which leads to either a Medkit (in FFA) or a Mega Health (in Tourney). Despite the size, the layout takes advantage of the limited space well.

Gameplay is somewhat limited as the RG and LG are absent, so the RL will be a hotly contested item. Don't underestimate the SG's effectiveness in this arena though as there are plenty of opportunities in the halls to deal some serious damage. You can also use the PG at a distance to pick on people who are in control and / or deny items. The GL can be used to control the lower areas - for example, you can spam nades in the four holes in the central area to give people at the PG a rough time.

Graphics are marvelous and wonderfully demonstrate sst13's mapping abilities. Colors are well-balanced, with the dark, dreary brown metals mixed with white concrete and some tasteful lighting, such as the cyan lights at the PG. Rocky walls are added in places to give the map an underground feel. Despite the fact that the map is dressed mainly in id software textures, it still manages to deliver a stunning atmosphere and respectable visuals.

Sadly, botplay isn't the best in the world. They are capable of acquiring all of the map's major items and weapons except the GL, but they are mostly interested in the YA in the RL room, as well as the RL. I hardly ever see them going for the MH / Medkit, and they often completely pass by the other YA in the GL room, and simply take the jump pad to the side. "What's this? A shiny yellow armor? Nah forget about it, this jump pad seems more interesting."

There is also no TDM support, which is unfortunate as I think 2v2's could have worked well here, with a power-up taking the place of the 50+ health in the center.

As an easter egg of sorts, sst13 also has a stone statue of Tank Jr. looking like a boss as he holds a flag. You can't see him while you're playing though sadly, you'll have to go into spectator mode (or noclip) to take a gander at his awesomeness.

Overall I'd have to say that the idea of redesigning the Dreamcast split-screen maps was an excellent initiative, and this map is certainly worth your download time, whether or not you have played the original. 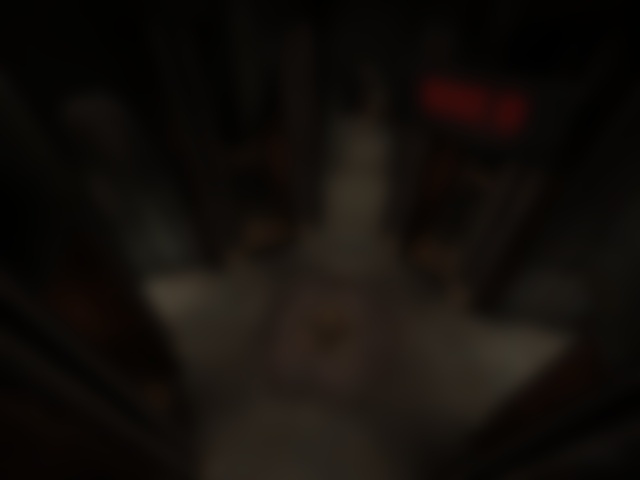