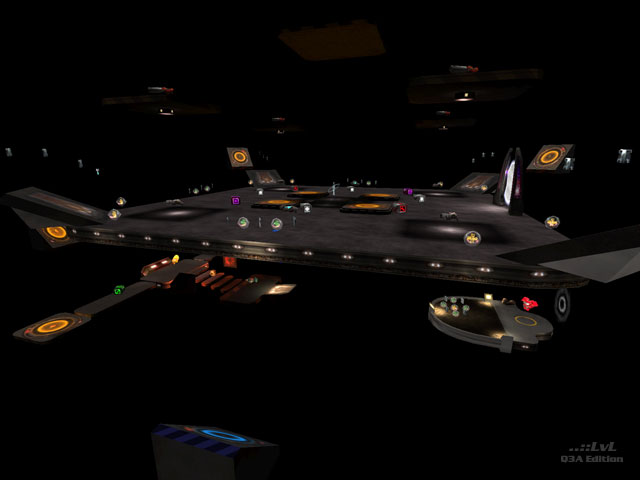 Don't be fooled by the title. While the map is small, (though the readme claims to say "medium") this is not a remake of the famous Quake II map, "The Edge". Rather, this is a CTF map designed exclusively for the Team Arena modification. It is also playable in FFA, TDM and Tourney. Despite being a TA map this map does not support Harvester, Overload or One Flag CTF.

The layout is similar to Vortex Portal, in the sense that different sections of the map are separated from each other, only accessible by teleporters or portals. The bases are composed of three minuscule, rectangular platforms, with the flag at the back with a mega health, all runes but Ammo Regen, and a nailgun with two boxes for it at the sides of the exit teleporter.

The middle ground is actually separated into two sections - the main area is a medium-sized square platform with five other, smaller platforms floating above it. Four of these platforms are arranged radially with RL's sitting on top of them (yes, four RL's), and the fifth rises above them, is somewhat bigger, and has a RG sitting atop an out-of-place pentagram. On the bottom you can find two PG's, four (lol) CG's with two ammo boxes for them within only a few steps of each other, and a Red Armor. Invisibility spawns in the middle. The higher platforms are accessed through accelerator pads mounted on the corners of the bottom square platform. Below this platform is some steps leading to a LG and another accel pad back to the main plat. The bases can be reached through precarious angled bounce pads aimed towards a pair of appropriately colored vortex portals. The RA sits right in front of a viewing portal (which ironically can not be seen through) that leads to an invulnerability, Ammo Regen, and the prox launcher with - you guessed it - two more ammo boxes.

The poor, cramped layout is already enough to dismiss this map; but the item placement makes it even worse, as you can already tell. Although I have nothing against TA weapons and items, I personally would have left out the chainguns and prox launcher. The CG is way too powerful in the open central grounds, and people can spam mines in front of tele entrances and exits with little effort. The nailguns are fine and actually work relatively well in this environment, considering its reputation for being rather weak. The ammunition should have been spread out more and in lesser quantities - there is no excuse to have two boxes of nails right next to each other and their respective weapon. Having four RL's in a map is pure overkill, and games can turn into nail-rocket fests very quickly. There should be only one plasma gun. Invisibility should have been left out considering the size of the map - if you grab it, it becomes too easy to obtain captures.

If that was not bad enough, the map is extremely dark. I had a difficult time fragging people and helping teammates because I could not see anything. You definitely should turn up r_gamma to at least 1.5 to have a chance of sanely playing this map, anything lower is nothing short of fumbling in the dark.

Bots played okay, but as usual for maps of this type, they are prone to falling off the map.

Even though Small's Edge is an improvement over his last two maps, "Random" and "Place of Odd", however there is still a lot left to be desired in the department of level design, and as such it is not really worth the download for most people. On the bright side, I am glad Gooball is making maps for the long-forgotten Team Arena mod.

If he can sharpen his mapping abilities and channel those newly gained skills into another such map, it would be a refreshing experience amongst the seemingly endless horde of CPMA / vq3 maps. Applause for him!

Tig's notes: The original release which was reviewed had a missing texture issue. The current download is for a tweaked version of the one that was reviewed and includes a fix for the missing texture, base teleporter markers, which although very small are a huge help, and a number of other small changes. 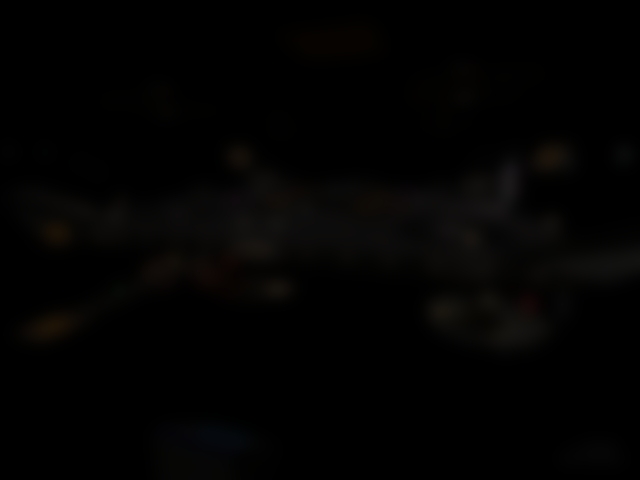