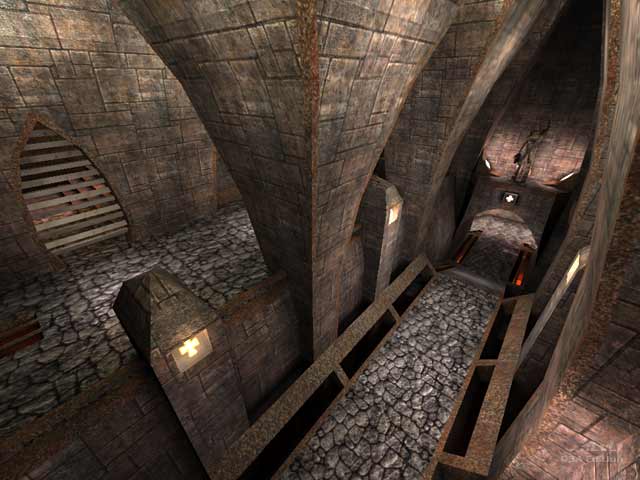 A real dungeon of woes from dezperado. If you can find your way around this maze, you're doing extremely well. Perhaps a map that should have been 2 or 3 smaller maps it's an absolute rabbits-warren of corridors, rooms and pathways, with 18 respawn points to boot. I ran around this map for about 30 minutes and was still getting lost. Yet losing your way is only half the problem in this trap-filled map designed with one sinister purpose in mind "to support auto destruction among Q3A players". That's right, set a time limit for this baby because if you're not careful you might not make it to 10 frags.

For a mapper with as much talent as dezperado, this map was a little disappointing. It lacked flow of game play due to a lack of orientational cues to give you a bearing (Where the hell am I?) and was a little bit too easy to auto destruct in. In a map of this size and layout, keeping your bearings or an ability to get them quickly is paramount. Unfortunately, neither was the case. The consistency of textures and dark lighting prevented this. Atmosphere-wise the map proved a great success. However, the pitfalls were a bit too hard to ignore. You might want to check out some of the areas in this map though. Dezperado has made some rooms that would make a fantastic centerpiece for any map. Unfortunately, the overall package is in need of a game play overhaul.

Bot play was boring, and finding a fight was an issue. The game was a bit laggy. Probably best on a LAN.

Set aside a day to learn this map. You won't keep it.