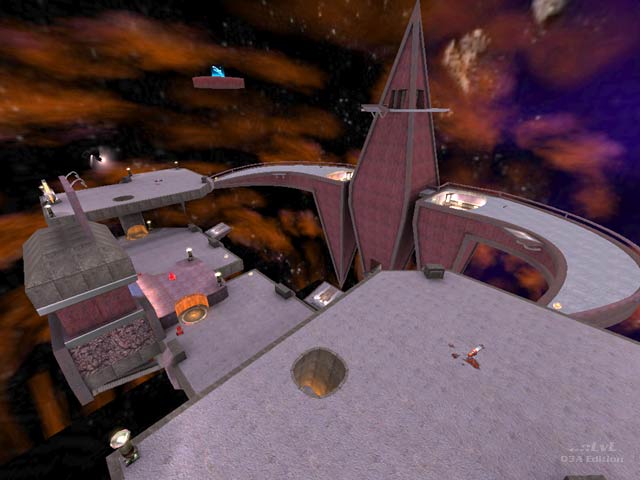 Another of those sprawling horizontal maps, constructed in the deepest corners of space for your blood thirsty amusement. Completed with great attention to lighting, both environmental, and localized sources, that complement tech textures with a warm yellow glow or a stark white finish. It looks great, from the streamlined plateaus and their jump chutes, across to the central hut, and it's armour pedestal, to the immense Q3 symbol, with its lift, tunnels and wings on the far side. A tiny Quad platforms sits centered above it all.

A great deal of effort has go into the sound track accompanying this map. Its a somewhere between those moody original tracks in Doom and the standard Q3 tracks but played in a more modern tempo. It works too, fitting the fast paced action of the arena, while managing to be subtle enough to let other important effects ring through. If only the map played as well as it sounds.

Despite the huge environment in The Truth, the playing area manages to feel somehow restrictive and cramped. Not in any immediate sense, certainly, there is plenty of room to fight in most of the map, in fact, ample room for machine gunning or railing. But in the broader sense, the availability of areas to explore, passages to escape down, avenues of pursuit, there's little more than two routes to take at a time. Consequently play can be predictable, and few fleeting scraps end without one player being killed. With the map being quite so open, and the railgun perch overlooking most of the map, it's perfectly feasible that a good player dominate from start to finish, sitting aloft, even managing to control the lift (the only way up there), with relative ease. Certainly in a tourney game, that player could be very hard to dislodge. Bots can also become stuck at the apex of the Q3 symbol, where clip brushes have been forgotten, or purposively omitted.

Moving around the map is very straight forward and you can easily explore the entire level within a minute or two of playing. Connectivity is fluid and provided in the form of a lot of jump-pads, two teleporters and a lift. It's too tempting to camp the sniper nest both because it has the only real cover in the map, and because anyone who wants to kill you either has to do so with machine-gun or take a very noisy lift up there.

Only 3 different weapons, fortunately only one railgun. Health is almost nonexistent except the mega health and two 25 health orbs, no armour to be found except Red and quad is only a jump-pad away from the rail. Mega jump pad chute drops you right onto Red Armour spawn. Could use some tweaking, but at least you know where your targets are headed when you're sniping :)

Bots struggle with this map, never going for the mega, only occasionally quad. Most used the sniper nest for launching rockets rather than sniping with the rail, lots of falling off the map for them too. You can get stuck at the top of the tower, and this happens to bots a bit too frequently.

This map is more catered for sniper training. 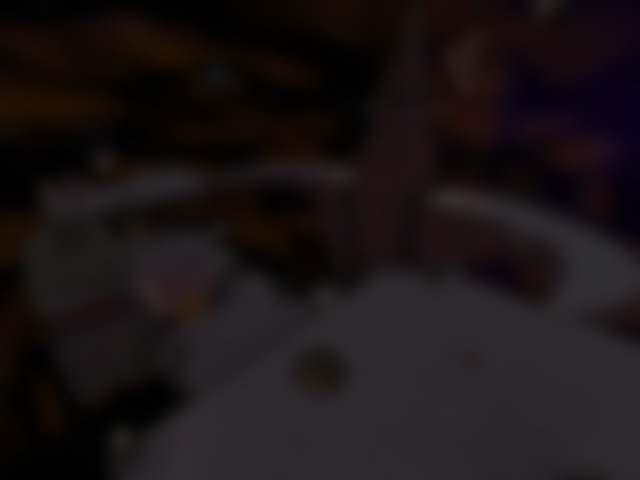