Author : Christian 'FergusDog' Stock
Email Address : **email removed**
Homepage : members.xoom.com/fergusdog (not much there yet, but I'll work on it soon)
Description : A reconstruction of an italian palazzo

Additional Credits to : Armin Rigo for QuArK
5thD for m2m
id
bastardsonofRAWBEEFSKIN and Bill Brooks for beta testing
all the people answering my questions in several forums
all those people putting their efforts and spare time into the quake community

This level is based on the Quake version I recently released. For this version bugs have been wiped and the whole level has been tuned.

First a warning: I started this map fairly soon after Quake hit the shelves and Quark was in its first released stages. Back than, the hype of true 3d was big and many people constructed levels that the dos quake engine just couldn't handle. This level is full of pillars und is very much NOT designed for optimal speed. Anyhow, I think, it looks great and it is different to the typical deathmatch level and simply fun. Having said that, it runs well on my system (TNT, Celeron 400, 128MB).

I found, that this level can be fun for 1O1 and free for all with maybe up to six players. Any more, and it will become a little bit crowded, but six players is fast and furious how I like it :)

Rocketjumping onto the upper ledge didn't work for the q1 version, thus I was very delighted that it worked straight after the conversion. If you're not very good at rocketjumping, I suggest, that you have a few practice goes before trying in a full-on game. BTW, it is quite easy to jump over the quad, if you rocketjump the short way. Thats the price to pay for being able to reach the quad as well by rocketjumping the long way. If you have difficulties: practice :)

When playing with bots, traffic seems to accumilate around the room with the RL. I selected bots, that distribute the gameplay a little (eg hunter goes for the LG and Patriot for the PG). Be careful, when making your own custom bot game (too many rocket loving bots will transform the RL area into a major blood bath, while not going anywhere else...)

Unfortenutly, I am struck with an incredibly slow modem and haven't tested this level with other players. If you have lots of time at hand, I would be delighted to receive a demo of human players fragging away in my level (please don't send me to large files though...)

Game : Q3A
Map Name : Palazzo
Deathmatch 2-8 : six is plenty of action
Tourney : yes
Teamplay : no
Mods: : osp (railgun only version), probably InstaGib is lots of fun, although I haven't tried it to be sure
New Textures : yes (some darked versions of q3a textures, 2 paintings, a modified diamond pillar texture/shader taken from the level dmmq3dm3), a texture from the VRmagazine

Base : Q1 conversion and improvement. (the original was constructed after the plans of a palazzo)

Construction time : two weeks for conversion and a few days for making some structural changes to make gameplay more fluid. The original took a few years (this level has a long story and hey, it might be record breaking: Probably the longest construction time for a quake level, ever!). I started it right after quark came out the first time. I constructed the base quite fast, but gave it up, since the structures were too much for quake (too many pillars and details). When I got my TNT, I got back to it, and was impressed, how well GlQuake handled the level. Since I liked the idea of hiding behind the pillars, I started working on it again (I started the thing with greek temple style textures and decided to retexture it into a medivial style, which better suits the italian palazzo theme. That took me a while, though), but than q3a test came out and I decided to wait and transfer that level to the new engine. And this is the product! It took quite a while, since during the conversion a lot of things got screwed up and than the whole level had to be retextured again.)

Unzip file and put it in the baseq3 dir. Start q3a and select level in squirmish menu.

I included a second arena file with custom bots. For harpy and flisk go to my site to download my botfile. If you have bot files for harpy and flisk already you can still use mine, if you rename my bots in the botfiles and my arena file. You'll have to download harley seperatly (very cool model, which comes with its own bot files). Search planetquake if you can't find it.

I included a osp file for rail arena play. This is quite fun, keep jumping to succeed. Put the 'railgun.cfg' into your osp dir, load the osp mod and run 'exec railgun.cfg' from your console. For more details on osp and alternative executions see the osp docs.

None that I know of, just a few comments:

There are a lot of doors which give a constant noise background. Removing doors wouldn't be a good solution as the gameplay would suffer (trust me, I tried that). I don't know of any way to change door sounds either, so 'sound tracking' opponents is difficult if not impossible.

Its impossible to allign the textures on the walls correctly unless I would change the structure, which would affect gameplay. They are either alligned on top or bottom and I left them alligned on the top. However, you have to be looking for it to notice...

One last word: Make sure to not accidently have the pvs table locked (r_lockpvs should be 0). I had a typo in my config and was wondering why the hell the areaportals don't work. Dooohh.

Please, let me know of anything that you don't like. Or of any bugs, if there are any.

palazzo (buggy (but playable) because of quark, I won't fix it)

Authors may use this level or any parts of it as a base to build additional
levels, if they do the following:
- let me know, what they are doing with it
- give credit to me
- include this readme
- if you are only using a texture, just give credit

It must not be sold, without permission from the author. 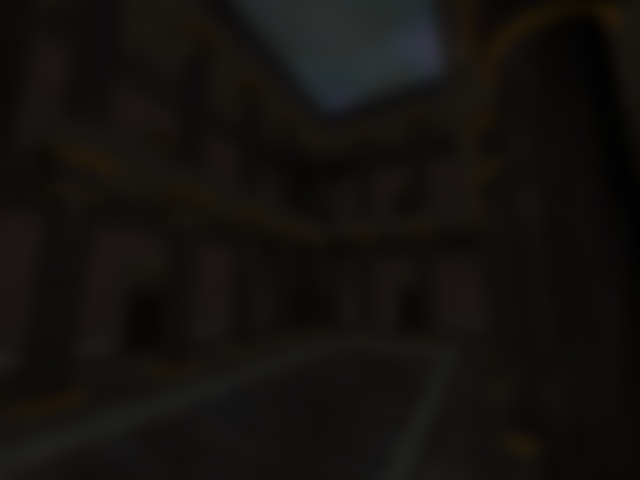