Titans is for CTF styles of play that do well with slightly larger maps. This
"edition" is for NON-Team Arena play. If you want the Team Arena edition,
that's a separate download available at

Challenge ProMode is also supported by OSP, available from

CPMA and OSP are scheduled to be merged at some future time; I don't know what
the mod or the website will be named then. :-)

Larger maps like Titans are also fun in CTF mods that support the grappling
hook. However there are surfaces in Titans that I want to be "ungrappleable",
to prevent the most extremely lame forms of hiding: the mountain face, the
interiors of the center chimneys, and the exterior walls that face onto the
deathfog. For these surfaces to be "ungrappleable", the mod must support that
particular feature.

Finally, you can of course run this map with unmodified Q3CTF. Larger maps
are actually better for botplay (IMO) because botplay needs every bit of
additional challenge that it can get. However with human players you may or
may not like the way that a map of this size works out.

Place the pk3 file in your "baseq3" folder.

To examine this map, or to play it with bots, use the Single Player menu and
select the Skirmish button at the bottom; if that menu or some variation is
not available in the mod you are using, then use the Multiplayer menu instead
and select the Create button. Then set the game type to Capture the Flag,
select TITANS_CTF in the map list, and hit the Next button. Customize the
server settings and bot loadout (if bots are supported), make sure that Pure
Server is OFF (to avoid a certain bug in some versions of Q3), and then start
the map.

- At the "ladders", you can drop down to the ground at the foot of the ladder
without taking damage or making noise... just think of it as "climbing down
the ladder really really fast".

- Up through at least version 1.12 of Classic CTF, there's a problem with maps
that have a lot of items and spawnpoints, if the map comes with a botfile.
The symptom is lots of scrolling red error messages in the console. To prevent
this, enter "\seta max_levelitems 400" in the console before loading the map,
if you are using a version of Classic CTF that has that problem. That should
get rid of the problem for all subsequent map loads.

- Certain surfaces should be "ungrappleable" (see above for details). If you
play with a grapple mod that doesn't support ungrappleable surfaces, then the
gameplay on this map will suffer.

If mappers want to learn about using ungrappleable surfaces in their maps,
examine the shaders and comments in titans_nograpple.shader. This feature
_must_ be explicitly supported by mod code for it to work, and the mod code
must use the same bitflag for surfaceparm nograpple (0x10000000) that is used
for this feature in other mods that already support (or will support) it.

All media from other authors used and/or modified with permission.

Media credits: - Teleporter model: Todd "Mr.CleaN" Rose. Skin replaced by
me... doesn't look nearly as good, but fits in with the
map's theme now.
- Colossus model and skin: Bjornar "Ewooz" Johansen;
starting from the original "judge" model, I tinted the
skin, removed the throne, and "supersized" the model.
- Fountain model and skin: Ranjeet "Rungy" Singhal; I've
added surfaceparm trans to the skin and reshaped the model.
- Pool brick texture (cosmo_brick48_mod4.jpg): a hacked-up,
resized, tinted version of a texture from CosmoGraph
(www.saturn-online....main_native.htm).
- Brick and stone textures: based on Mr.CleaN's Egyptian
textureset; variations by me are indicated with the _mod
suffix. The mrclean_based_combo_tiles texture is a
composite of multiple textures.
- ctf_unified logo textures and shaders from Threewave
(marked with the ctfu_ prefix).
- door_layer.tga was extracted from an id Q3 texture.
- The envmapmach_ textures are variants on an id Q3 texture.
- Skybox: made by me using TerraGen
(www.planetside.co.uk/).
- The glyphs are letters from the synthetic language
Denden, of which I know very little other than it looks
cool and its font was free for any use. If you're curious
I'm sure a Google search will turn up more.
- Shaders in titans_compat.shader and titans_nograpple.shader
are created by me or based on existing shaders as credited.
- Wind sounds: Free sounds from around the Web, don't
remember where.
- Teleporter sound: this is drone_starship from Death2Uall's
Industrial Pack 1 (factory.thebackburner.com/).

Other thanks: - Jan "MrElusive" Paul for much help with the bot support.
- The denizens of the Quake3World level editing forum, for
advice and entertainment.
- bushboy, nakedape, some guy i know, Maj, and Drunken Boxer
for comments and suggestions. The entire M3A team for help
with the previous incarnation of parts of this map as an
RA3 clan arena.
- Clan Plaid for being my "gaming support group".
- Of course, Robert Duffy, Paul Jaquays, and the rest of id
software; and Timothee Besset and the Q3Radiant ninjas.

* This is the max r_speeds value with gun display enabled, 3D icons, 3D
items, and high detail geometry, as viewed from the normal playing field.
It is possible to see higher values when spectating/noclipping/grappling to
the highest points in the map.
** This is the imagelist size at r_picmip 1 (2nd-highest texture quality);
base Q3 standard is 3 Mtexels.

This map was designed to the system specs for Team Arena. It should perform
as well as the large Team Arena maps (hopefully better), but it will be more
taxing to your system than older Q3CTF maps.

The nailgun from the Classic CTF mod is used in this map. When the map is
played in other mods or in unmodified Q3CTF, the nailgun stand will be empty
(as will the locations of nailgun ammo).

I am -- finally -- happy with the ProMode/Q3CTF bot play on this map. There's
one little quirk, and here it is: bots are extraordinarily hesitant about
going after the yellow armors in the middle. They pause and run in place for
a bit before jumping over. Because of this I haven't given any extra weight
to those armors, and I don't think that bots will ever go to get them unless
you tell them to.

If you play in 16-bit color, your graphics card loses some precision in
determining how far away polygons are from you; this can lead to distant
polygons getting mixed in with each other and looking odd. You can see this
effect on the large statue; nothing I can do about that. It also affects the
special effect of the colored runes "bleeding in" at the tops of the obelisks.
Other than that, I think I've gotten rid of any other bad visual effects that
can happen to the map in 16-bit color. (At the cost of increasing the texel
count a bit.)

All graphics and sounds in this archive remain property of their respective
owners; they are used here with permission.

The author reserves all rights to the contents of this archive (pk3 and text
file) not superceded by prior claims and not waived in this document.

You may of course install this map on a Q3 game server, and you may install
it for a Q3 client to play the map alone or on a game server.

You may not use this map as a base for creating other works without
permission from the author. 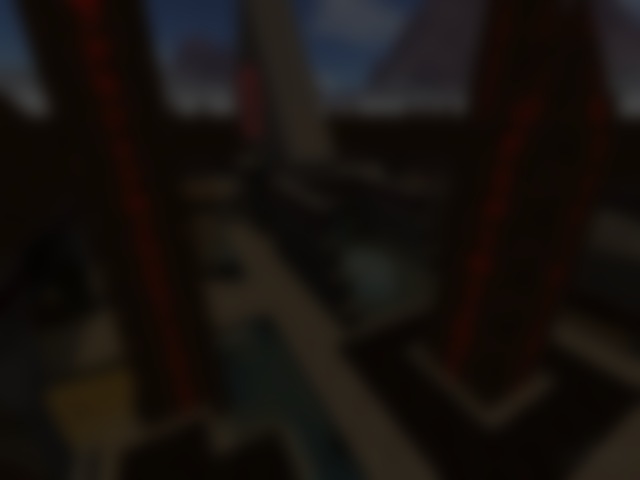