Place bot-pyre.pk3 in your baseq3 folder.

Pyre can be launched in the same way as any other bot.
It was created specifically for a version of my first space map, Sidereal Screams - Electromagnetic Mix. However, that map is unlikely to ever be finished, so I released him independently some time ago. When it came to choosing a bot enemy for my shameful q3dm17 remix, kelltall, he seemed the obvious choice. I have tweaked his characteristics very slightly to improve his gameplay in kellfall. Therefore, this version of Pyre should be considered a replacement for the previous version.

The additional graphics, the fire and glowing eyes, were created from scratch.
The shader references the original skeleton skin, stiff.tga, by Kenneth Scott.
All botfiles written in Metapad, a useful improvement over Notepad. Get it from liquidninja.com/metapad

You may distribute this pk3 file on any format, to anyone else.
There are just two stipulations -
1. All content must remain unaltered.
2. This html file must be included, also unaltered.

"And do you feel, do you feel it at all?
'Cause together we stand, but divided we fall!"

- The Mission, 'Divided We Fall'

I've included all the custom and modified textures I made for the map, including the editorimages, in the pk3. Although not neccessary to run the map, the editorimages will be useful for any mapper who wants to use the textures. They only add a few hundred kb to the pk3.

The jump pad on the lower platform of the team bases was originally intended to propel players straight up into the YA. The bots - as usual - were unable to cope with this trajectory so I had to tilt it towards the front floating jump pad. This doesn't detract much from the human gameplay of the map, but dramatically improves the botplay.

I've played a lot on the stock id ctf maps, including the space ctf maps. Divided We Fall is a response to those - mpteam6, q3ctf4 and the various incarnations of q3tourney6 - without being quite as chaotic or gimmicky. Hence the deliberate similarities of some of the structures and features. It's my attempt at a 'serious' space ctf map. In the end, it isn't really that serious :P

This is the Team Arena remix of my space CTF map Divided We Fall.

All the Team Arena game types are supported, though as with any other map some play better than others. Bots play well enough, considering the map is both space and CTF, two things the Q3 bots are generally confounded by.

Note that the recommended player load is slightly less than for Divided We Fall. I reckon 3v3 is the best way to play this map. I reckon Harvester is the best game type, while Overload is the worst. Without rigourous playtesting, I can't say more than that. YMMV.

Playtesting: No-bloody-one. Where the hell were you guys?

Okay, it's cheap. I know. That's why I included this as a bonus with my proper space CTF map; it isn't interesting enough to deserve a separate release.
Due to q3dm17 being included as a sample map with Radiant, there have been numerous remixes inflicted on the Q3 community. Most involve no more than the removal of certain weapons or a quick retexture. Lame.
Since I've played q3dm17 a lot - with bots, with humans, with instaunlagged - and made my own custom item configuration with the excellent ICE mod ( www.planetquake.com/spitfire/ice.htm ), I decided to go the whole nine yards ( ahem ) and release a more polished version. To my eternal shame. Beelzebub and all his little minions have a special section of hell waiting for mappers like me.

Here's a rundown of all the changes I've made...

SGs moved to the center of the upper platforms, SG ammo moved behind them at 45°
MG bullets added on bottom platform at the start of the runway
RG slugs reduced to one box and moved to the far side, opposite the MG bullets

Added a second spawnpoint on the top platform to mirror the one on the opposite side next to the +50 health; both of these are angled at 45° and moved forward slightly to orient the player along the curved edge, quickly allowing movement either sideways to the SG or down to the RL.
Added spawnpoints behind the SGs directly facing the accelerator pads.
Added spawnpoints to the bottom platform; the extra spawnpoints overall help to reduce the chance of bots respawning predictably close to the RLs and makes acquiring the other weapons a little more attractive.
Moved the spawnpoints closest to the RLs away from the corner so that the player spawns without the ammo box directly between them and the RL.

The rim around the center bounce pad has been flattened to obviate the risk of cratering.
The side protrusions of the farthest RG island have been widened slightly.
The clip brushes surrounding the light fixtures on the edge of the main walkway have been given vertical faces to simplify movement when colliding with them.
The clip brushes around the teleporters have been simplified for better collision detection and ease of movement; players still have to enter the teleporters from the front or back though.
Short projections added on the corners of the top platforms beside the accelerator pads; these are to aid jumping to the center bounce pad without being so framerate-frustrated.
The very narrow ledge at the back of the main supports, below the top platforms, has been removed.
Narrow trim added to the main supports next to the +50 healths on the bottom platform; this is to ensure visibility when approaching those items.

The pink circuits on the main supports and under the top platforms are gone ( yay! ); replaced with busy gubbins textures featuring yellow pipes.
Also on the main supports, the geometric texture has been replaced with the blander gray metal texture.
The cylindrical supports for the top accelerator pads have a more detailed techy trim texture.
The bottom platform is now made of concrete, which shows off the lighting better and provides a smoother background against which to see players and dropped items. It also matches the bottom platforms of my CTF map.
Hazard chevron trim around the bottom platform. This looks better next to the concrete and clearly indicates the danger of falling, which is sort of what hazard chevrons are supposed to do :P
Spawnmarker on top island under second RG changed from a pentagram to the scorched floor shader to match that under the first RG and SGs.
Skybox. Apart from adding a good bit of atmosphere, it also serves to accentuate the edges of the platforms in most locations from most angles. If you prefer the original black void, play with r_fastsky 1

The main intention behind my personal configuration is to increase the travel around the map and put a bit more gameplay on to *all* of the platforms and pads. The RG still remains the primary item of the map, but there are a few more options as to acquiring one and the limit on the ammo helps reduce the chance that only one RG pickup is enough to win. Secondary item tweaks throw some more variation into the mix, and the Battle Suit is a better choice of powerup for a space-rail map. 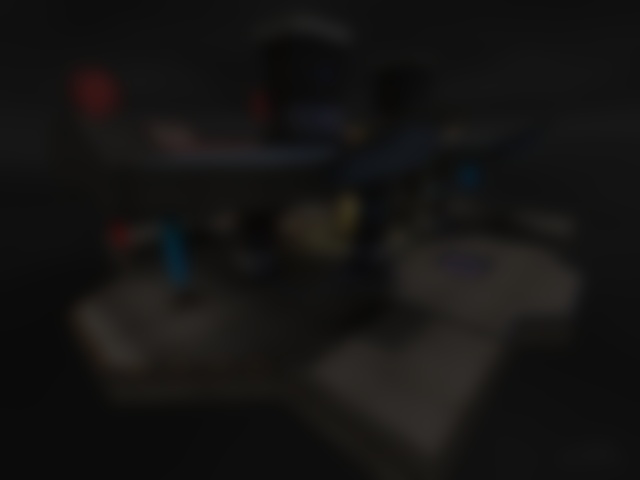