Canyadoit is a one player puzzle map. The goal is simple: to reach to end of the map. There are many secrets along
the way which can help save time and skip annoying parts of the map. Some of them allow you o pass over significant
chunks of the map. This was the first puzzle map I made, so it's relatively easy. Intead of describing it in
detail, I'll leave it up to the player to figure things out.

btw: this was the map that inspired canyafigureitout (originally named canyadoittogether), not the other way around
I released them in the wrong order.

After completing canyadoit, I noticed that several of the rooms in the map would actually make a pretty good arena
for normal q3 fighting. So I converted the map to a multiplayer version. In this conversion, I took out all puzzle
solving aspects and replaced them with gameplay features, like health, I added many more secrets and replaced the
secrets that were geared towards going through the puzzle fast with ones that held items or power-ups. In addition
to just being a straight conversion, roompie also actually has structural modification suited for head to head game
play. For example, roompie has over 3000 brushes while canyadoit only has just over 2200. But the map would have
been way to big as a straight-forward arena (unless u get at least 10 people in it). In order to solve this problem,
I wanted to make it so that a player can quickly find where others are in the map. My solution was a teleporting
minimap. Every player spawns in a room thats out side the actual map, with no way of ever getting back. He picks up
his weapons and advances to the next room. Perhaps the coolest thing about roompie is the minimap. It is a perfectly
proportionate replica of the actual map scaled down 8 times. It serves two purposes: showing which rooms have other
players in them (by glowing purle) and teleporting to those rooms. Each room has several teleport destinations to
avoid telefragging. Every part of the minimap will indicate purple, and almost every part (every significant part)
will teleport. If you stand above you can actually watch a remote player's path as he moves around the map. Since the
map was obviously already experimental, I chose to have some other experimental aspects as well. There are no guns
in the map, instead each play can pick from a predetermined selection of weapons and supplies that was chosen and
locked at the beginning of the game. In the map there are health and ammo giving platforms instead of the actual
items. Armor is hard to come by, there are some shards lying around, and a few very well hidden secret armor
platforms. There are also power-ups in secret areas. If it's annoying grabbing weapons before you jump into the map,
roompie might well be played in instagib too.

If you have many people playing you might use the whole map in games, jumping into which-ever rooms are purple,
but for a small number of people or a 1v1 you'll probably just agree on a room and keep jumping into the same one. 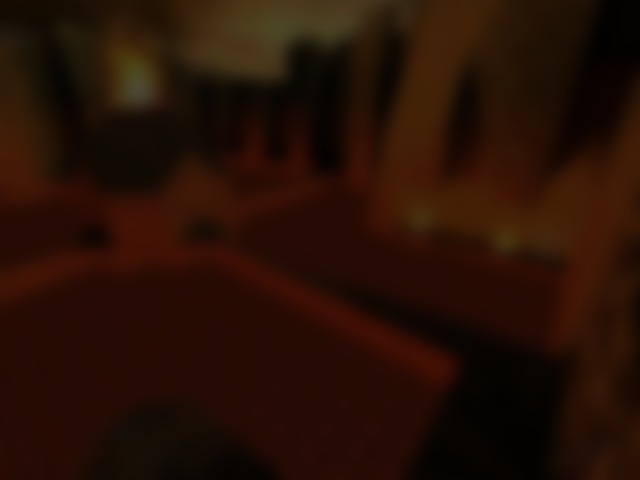